Ripclaw is a Predacon. She is fiercely protective of her fellows. This almost maternal side of her personality is balanced out by the way she viciously crushes her enemies and leaves their circuits burning with her mech-venom.

Ripclaw was created by Shockwave, with the help from Starscream who revived some Predacon bones. Shockwave also created Skylynx and Darksteel, who are full grown Predacons, while Ripclaw was still in her containment unit. She was only seen in Shockwave's lab and could still be there.

Tales of the Beast Hunters

Upon Ripclaw's emergence from her Hyperevolution Chamber, Shockwave told her that she must aid Predaking, who lived, but would soon be under siege by the Autobots and their new weapons technology. However, once Ripclaw left Shockwave's presence, she was approached by Lazerback, who warned her that Shockwave lied and that Predaking was in fact not alive. Together, they could destroy Autobot and Decepticon alike.

Heading into a desert, she encountered one of her first targets: Bulkhead. Swooping down from the sky, she crashed into the heavily armored Autobot, tearing his armor off and injecting him with deadly mech-venom before the pair even began to fight. Ripclaw was in the Canadian Rockies when she was spotted by Arcee, who sent the coordinates to the Decepticons in the hope they would deal with the Predacon.

Ripclaw was one of several Predacons who broke free of Shockwave's lab, causing the Decepticon scientist to flee. Information on her could be found via the lab's numerous data terminals.

Ripclaw's CNA was accessible through the cloning machine, resulting in Predacons that shared component parts with her. 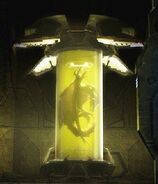 Retrieved from "https://transformers.fandom.com/wiki/Ripclaw?oldid=455551"
Community content is available under CC-BY-SA unless otherwise noted.