Revenge of the Fallen (game) 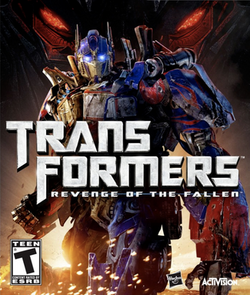 The Autobot campaign begins when NEST Pilot Sgt. Robert Epps reports Decepticons in Shanghai, China. Upon the arrival of the Autobots, Major William Lennox tells them there are Decepticons in the perimeter and must not escape. Ironhide is sent to fight them. When Optimus Prime gets word that Ironhide is missing, Ratchet heads out to find him and is ordered to get him to safety. After locating Ironhide, his power is recharged and another Decepticon battle ensues. The Decepticon forces then attack Shanghai's waterfront. After annihilating Decepticon troops, the Autobots face off against Demolishor. Upon his defeat and before Optimus Prime deactivates him, Demolishor states that The Fallen shall rise again.

The Autobots then head to Burbank, California where a previously unknown fragment of the Allspark has surfaced, now in possession of Mikaela Banes. Bumblebee is sent to protect Mikaela when the Decepticons detect the fragment also. After getting Mikaela and the fragment to safety, the Autobots get word that the Decepticons are attacking a nearby oil refinery and have trapped some engineers there. Ratchet locates the engineers and gets them to safety. A NEST unit headed up by Epps is surrounded by Decepticons at the West Coast Canal and need the Autobots to escort them to safety.

The Allspark Fragment held by the Americans has been stolen. NSA Chief Theodore Galloway reveales Megatron's location to the Decepticons. With Megatron's body in the Laurentian Abyss, Optimus tells the Autobots that if the fragment reaches Megatron's remains, he will be reborn. Breakaway ends up defending a Carrier Ship group guarding Megatron's corpse from the Decepticons. Breakaway repairs the damaged anti-aircraft guns and rescues the wounded soldiers. After all that is done, Megatron is reactivated.

Bumblebee goes to pick up Sam Witwicky who tells Bumblebee that they will be visiting the deli where Agent Simmons is currently working. While Sam goes to talk to Agent Simmons, Bumblebee defends the area from Decepticon troops. With info from Agent Simmons, Sam has Bumblebee take him to the museum to seek out a robot named Jetfire. While Sam looks for Jetfire, Bumblebee defends the museum from the Decepticon troops. Jetfire emerges from the museum and takes Sam through the inter-dimensional Space Bridge to Egypt. The Autobots also head to Cairo, Egypt to meet up with them.

Jetfire reveals the Dynasty of Primes have constructed a machine that destroys stars and harvests their energy. He also states that they vowed to never destroy a star that supports life in that galaxy....that was until a Prime called The Fallen had broken that rule and murdered his brothers. The Sun Harvester has been hidden in the deserts of Egypt. Upon arrival, Optimus Prime then searches for Sam while evading Decepticon troops. After finding Sam, Optimus Prime takes him to the Tomb of the 12 Ancients. While Sam enters the Tomb of the 12 Ancients, Optimus Prime defends the tomb from Megatron and Starscream. Optimus Prime defeats Megatron and Starscream, but they escape after Megatron impales Jetfire. Sam reveals to Optimus Prime and Jetfire that the Decepticons have come for the Sun Harvester. Before dying, Jetfire lends his wings and parts to Optimus Prime. The Autobots then head out to find the Sun Harvester before the Decepticons do.

Bumblebee then ends up fighting Devastator who is leading the Decepticon troops into attacking Cairo on its way to the pyramids. After Bumblebee defeats Devastator, the Autobots have yet to find The Fallen and the Sun Harvester.

The Decepticon campaign begins in Shanghai with Sideways tracking down Autobots in his area. He then learns that Grindor has gone missing and Sideways must find, repair, and transport Grindor to the extraction site. Once Grindor is safe, he attacks Autobots protecting NEST arrays and infiltrates them with a virus. This virus will give the Decepticons access to NEST communications. Next, Long Haul is used to destroy NEST bases located around the city of Shanghai. Finally, Ironhide emerges to fight Long Haul. Ironhide is killed and Starscream proclaims the victory as a message to Optimus Prime.

The Decepticons then head to California. Soundwave has learned that Sam Witwicky has given a shard of the All Spark to Mikaela. They hope to recover the shard and revive Megatron. Long Haul destroys buildings, capturing men who may know Mikaela's location. However, the probe Starscream uses kills the first three before they can be of any use. Although the last engineer dies, Starscream is able to discover Mikaela's location. Long Haul is once again sent to recover her. After her capture, the Decepticons head to the East Coast.

On the East coast, Starscream destroys multiple buildings in search of NSA Chief Galloway. He reveals the location of Megatron to the Decepticons. Breakaway attempts to stop the Decepticons, but he is killed by Grindor.

Starscream destroys the turrets on aircraft carriers guarding Megatron's remains in the Laurentian Abyss, and then destroys 5 battleships in the area. Megatron is revived and the Decepticons return to the East Coast. They then destroy the museum that Sam entered, but he is not among the ruins. They learn he was transported to Egypt by a Space Bridge.

The Decepticons arrive in Egypt. Megatron arrives on the outskirts of the city and engages many Autobots in combat. Jetfire and Bumblebee both challenge him, but they too are killed. The campaign then shifts to the city. Soundwave informs them that the Autobots have given the humans their Axion Gun, and Long Haul is charged with the destruction of the gun. Once the gun is destroyed, the Decepticons proclaim that no one can stop them now. The last mission is at the pyramids. Megatron arrives, and turns against The Fallen. When he is told by Optimus that "Prime's are born, not made", Megatron then defeats The Fallen before he can activate the Sun Harvester. The end movie shows Megatron forming an army of new Decepticons. (Different characters are available on each level)

The Decepticons have attacked a NEST convoy in Shanghai and hacked the Shanghai laser and SAM defense sites. Optimus Prime is being transported to Shanghai when the Shanghai laser cuts his transport in half. Optimus falls to the Earth. Bumblebee reports he is in pursuit of Sideways and Ironhide goes after Demolisher. Ironhide defeats Demolisher. Bumblebee chases Sideways over the rooftops of Shanghai and then Sideways takes to the freeways. Sideways gets away on Starscream.

Starscream takes Sideways to the Laurentian Abyss, and Starscream destroys the defenses to the base. Sideways then infiltrates the base and raises Megatron's body from the abyss.Sideways fight it Jolt and Jazz but is defeated.And killedand rase body in Abyss.

Still in Shanghai, Optimus faces Devastator, and defeats the behemoth. Ironhide arrives at the end of the battle, and Optimus finds The Matrix. The two later find out that Bumblebee has been captured by the Decepticons, and is being held on the Nemesis. Optimus and a squadron of Autobots go to rescue Bumblebee, who is at the hanger overlook along with another prisoner, Jetfire. Optimus eventually confronts Megatron in the Hanger, and is badly wounded.

Starscream and Megatron then head to Russia, where The Matrix is being kept at a NEST base. Starscream takes out the defenses, and Megatron steals The Matrix. Although, Jetfire followed them to Russia, and follows them to Egypt, where he finds a damaged Optimus, and gives up his parts to save him.

Jetfire transform and fly following Megatron,Starscream and Sixshot.The rest of the Autobots go to Egypt, and Ironhide is tasked with destroying a cannon that is preventing Optimus from approaching the Star Harvester. Ironhide completes this task Sixshot fighting with Ironhide, Ironhide defeat Sixshot; but Megatron attacks him. Optimus then lures Megatron away from Ironhide, and faces off against him, injuring Megatron. Optimus then destroys The Fallen by injuring him and throwing him into the Star Harvester, deactivating the machine. The end movie shows the Autobots rebuilding the destroyed pyramids.One Last Time... Autobots playable

The following are confirmed to appear in the game. Before each level is played, you have the choice of which Autobot or Decepticon you wish to play as. Characters are unlocked as you complete each level. A Downloadable Content Pack was released on August 27, 2009. The pack includes more than 10 new characters, 3 new maps and a new difficulty: Expert. The maps are Courtyard; an East Coast map, Hillside; an urban Cairo map, And Sandstorm; a fast-paced Cairo map.