"Heroes of the revolution never come along quietly!"

Quillfire is a porcupine-like anarchist Decepticon. His alt-mode is an armored militarized pickup truck.

Quillfire was among the Decepticons imprisoned aboard the prison ship Alchemor and was freed when the ship crashed on Earth. In Adventures in Bumblebee-Sitting!, the Autobots eventually detected Quillfire's signal and attempted to recapture him. However, Quillfire led them on a chase through a car park into a warehouse area, and succeeded in escaping after he nailed Bumblebee with one of his quills. While driving, Quillfire discovered a number of captive elephants and set about liberating them from their oppressors. When the Autobots turned up again, Quillfire used one of his signatures to lure Strongarm and Grimlock onto a carnival ride, trapping them on it. He then sought a hiding place and entered a tent, only to find the floor was covered in bouncy material. Bumblebee, regressed to an immature state by Quillfire's toxin, began causing Quillfire to bounce. When Quillfire attempted to hit Bumblebee with more quills, the bouncing resulted in Quillfire being hit himself. Quillfire passed out and was subsequently placed back into stasis.

In One of Our Mini-Cons Is Missing, Quillfire was accidentally freed when Jetstorm's escape pod crash-landed in the Autobot's scrapyard and damaged his stasis pod. Intending to spark a jailbreak and overthrow the Autobot oppressors, Quillfire managed to reactivate Springload, who immediately re-embarked on his quixotic quest for Doradus. Quillfire won over the other Decepticon by pretending to be in touch with the "spirits", and persuaded Springload to come along with him. The duo managed to break into a human military base and commandeer an experimental tank; Quillfire assured his increasingly skeptical partner that the human contraption would carry them to Doradus, which Quillfire secretly noted that the vehicle served as an added measure of protection for him against the Autobots. When the Autobots intervened, Quillfire and Springload were forced to fight against the far more agile Jetstorm and Slipstream. Springload wound up accidentally kicking Quillfire, who accused his partner of harming the leader of the revolution. The enraged Quillfire blows his cover by stating that the spirits demand a punishment for Springload, to which Springload realizes that Quillfire was a deceiver. Springload finally snapped and attacked Quillfire and the two Decepticons began fighting, destroying the tank in the process. Both of them were forced out of the vehicle by the Mini-Cons and were soon placed back in stasis pods.

After Steeljaw and his gang broke into the scrapyard in Lockout, Quillfire's stasis pod was deactivated. He was quickly re-frozen by the Autobots before he could escape.

In Misdirection, when Steeljaw broke into the scrapyard a second time, he successfully deactivated Quillfire's stasis pod, alongside several others, as part of a bid to bolster Glowstrike's forces. When Thunderhoof brought up Steeljaw's past failures at leadership, Steeljaw informed the Decepticons of his alliance with Glowstrike, and gave them coordinates to follow while he remained at the scrapyard. The escapees later reconvened at Steeljaw's coordinates, where they was inspected by Glowstrike, who seemed pleased by the new cadre of "elite warriors".

In Impounded, teamed with the Mini-Cons Back and Forth, Quillfire was sent to Crown City to obtain supplies and proceeded to leave his insignia everywhere. Bumblebee and Strongarm found him raiding an auto parts store, but after a brief chase, he was able to take them out with his quills, knocking them unconscious and trapping them in their vehicle modes. He continued raiding stores, only to be found by Grimlock disguised as a crane, only for the Dinobot to promptly fall over. He was forced to withdraw when the other Autobots arrived, but headed for a nearby truck stop to continue his scavenging. The Autobots caught up with him and though he was able to evade Bumblebee and Strongarm when he got them to drive into a maintenance pit, Grimlock's crane hook snagged him and he was later carted back to the scrapyard with his Mini-Cons on Strongarm's trailer.

In Decepticon Island (Part 2), Quillfire's stasis pod was later taken back to Cybertron by Optimus Prime, Windblade and Ratchet.

As it was revealed in Freedom Fighters, the High Council released Steeljaw from prison to keep Bumblebee and his team occupied while they made plans to summon Megatron.

In Exiles, Quillfire was also released with the promise of a full pardon should the Pack succeed in terminating the Bee Team. Returning to Earth, they mounted on assault on the scrapyard which drove out the Autobots, but lost track of where their quarry had gone. They lured the Autobots to the Crown City Dam, and during the battle that followed, Quillfire was clobbered by Grimlock, causing one of his quills to jam a generator. After being zapped by the generator himself, Quillfire joined the other Decepticons in a retreat which ended with them plunging into the raging river.

In Breathing Room, gaining new orders from Soundwave, the Pack headed to a waste disposal site so they could dig up radioactive substances. Despite interference from the Bee Team, they successfully found some waste, and when Quillfire interrupted another of Steeljaw and Thunderhoof's disagreements, Steeljaw tasked him with carrying the waste. He eventually got tired and stopped in a warehouse to ask someone else to carry the load, resulting in the Autobots catching up with him. During the ensuing fight, Steeljaw ordered him to knock down some acid, however he ended up being taken out by Sideswipe and the Decepticons once again retreated.

In Prisoner Principles, setting his sights on breaking into the nuclear power plant, Steeljaw set Quillfire and Clampdown to work digging a tunnel. When the Autobots found them, Quillfire managed to run past them and cave in the tunnel behind them. He rejoined Steeljaw, Thunderhoof and Underbite as they adopted camouflage so they could slip into the power plant directly. The Autobots again caught up with them, and Quillfire ended up pinned to the wall by his own quills. He was carried unconscious from the power plant when it was in danger of melting down, and later incarcerated in a makeshift cell in the Autobots' cave.

In Something He Ate, when the Autobots returned to their scrapyard base, Quillfire and the other Decepticons were taken with them and reinstated in stasis pods.

Quillfire is a Decepticon who took Megatron's idea of out-casting law into his way of expression. He does not tolerate authority and the laws that he considers to restrict freedom, even going against them at his own will. He would even mark with his own insignia on institutions in a representation that he's "liberated". However, when things seem to go downhill for him, he would be quick to cut and run.

Quillfire is loaded with quills on his back. He can fire them at his pursuers and can make them undergo unpredictable effects upon being pierce through the armor. The victim or victims would be effected through their nervous systems but they will revert to normal once the toxin runs its course which could last for a day or hours.

Quillfire freed Springload from his stasis pod and was surprised when he was searching for Doradus, which was just a myth. Quillfire formed an alliance with Springload by tricking him into finding Doradus by Quillfire explaining that he can hear what the "spirits" are saying to him. The pair escaped from the scrapyard and stole a military tank as their transportation. They used it to go find Doradus but the Autobots managed to intercept them. They deployed numerous weapons against their enemies but were eventually taken down. When the pair was fighting Drift's Mini-Cons inside the tank, Springload accidentally kicked Quillfire. As Quillfire stated that the spirits demand his partner to be punished, Springload realized his companion had lied to him and attacked Quillfire. Their alliance was broken and they both were captured by the Autobots to be placed back in stasis pods.

After being freed from their stasis capsule by Steeljaw, Springload and Quillfire seem to have no hatred against one another.

Quillfire was allied with Back in Impounded. He was very pleased in Back and Forth's work as he stated The next generation of the revolution will be in good hands. Eventually, when the Mini-Cons were defeated by the Autobots, Quillfire promised their sacrifice would not be in vain but he ended up being captured himself too.

Quillfire was allied with Forth in Impounded. He was quite pleased in Forth and Back's work as he stated The next generation of the revolution will be in good hands. Eventually, when the Mini-Cons were defeated by the Autobots, Quillfire promised their sacrifice would not be in vain but ended up captured himself. 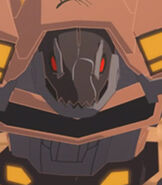 Quillfire tasted his own poison

Quillfire woke up from a stasis

Quillfire with Groundpounder and Overload

Add a photo to this gallery
Retrieved from "https://transformers.fandom.com/wiki/Quillfire?oldid=461072"
Community content is available under CC-BY-SA unless otherwise noted.