Teletraan I: The Transformers Wiki
Register
Don't have an account?
Sign In
Advertisement
in: Character stubs, Autobots, Decepticons,
and 4 more

Spacepunch, or Punch for short, is an Autobot, but he pretends to be a Decepticon named Counterpunch. Both of him are really secretive. 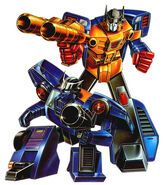 When they arrived to steal the key to the Plasma Energy Chamber, Counterpunch warned Pounce and Wingspan about his own impending attack, making a big deal about how Punch was his "Autobot counterpart" and how he "was nearby, real nearby." He was then damaged when he totally failed to stop the Decepticon clones. Genius, I tell you. He quickly recovered and was amongst the Autobots trying to find out what happened to Kup and Hot Rod's group. The Rebirth, Part 1

Debuting in the middle of the series, Punch/Counterpunch was a valuable asset in the ranks of the Autobots, frequently discovering dangerous plots of both Galvatron and Scorponok. Return of the Immortal Emperor, SOS from Planet Sandra, Daniel Faces His Biggest Crisis Ever!!, Find MegaZarak's Weak Spot!!, Ultra Magnus Dies!!

He was discovered as a double-agent by Galvatron only moments before the latter's demise. To add insult to the injury, Punch helped the Autobot Headmasters to kill the Decepticon leader by informing them that Galvatron's head was his weak point. The Emperor of Destruction Vanishes on an Iceberg, I Risk My Life for Earth, The Final Showdown on Earth (Part 1)

After Zarak took the leadership of the Decepticons, Punch's role was a bit reduced to leave room for Targetmasters and Duocons. In the penultimate episode, he was abandoned on Earth by Scorponok near Gibraltar, effectively making him useless. The Final Showdown on Earth (Part 2)

Outwardly, Punch is the consummate undercover man, but internally, he's a nervous wreck too paranoid of exposure even to open up with his fellow Autobots. That's a problem, as Punch has been under so long, his invented persona of Counterpunch is gaining an increasing life of its own, with Punch suffering worrying blackouts during his actions while masquerading as a Decepticon. More Than Meets The Eye

Punch transforms into a blue Pontiac Fiero. He has two distinct robot modes, with separate guns and rubsigns for each. They have separate arms, but the backs of Punch's torso, legs, and even head are the fronts of Counterpunch's and vice versa. The top of their shared head tilts to disguise the face not currently being used.

The transformation for Punch's robot mode depicted in the toy's instructions and animation is, in fact, not the intended transformation for the toy. Rather than extend all the way, as they do for Counterpunch, the legs are supposed to fold back at the "knee" with Counterpunch's feet folded out 180 degrees to become Punch's own (this, then, gives a purpose to the otherwise-pointless ridges on his feet, which now serve to keep the robot stable). This transformation - depicted in the toy's box art and on the front of his instruction booklet (sans feet) - creates a much smaller robot mode for Punch that serves to further distinguish him from Counterpunch.

Punch is a Transformers Collectors' Club exclusive redeco of the Universe Sunstreaker mold with a new head and two rubsigns. Due to the fact that the mold can already turn into two humanoid modes, turning him into either persona means just rotating the legs and flipping the panel on his head just like the Generation One toy.

The Doublespy concept seems to have been kicking around for a while before actually being executed: