Protoforms are part of a Transformer's life cycle in many Transformers continuities.

Protoforms consist of an unspecified, free-flowing, metallic matter layered over basic robotic systems. In many continuities, a protoform is the first stage in a Transformer's life cycle. These protoforms only await a life-giving spark and the alt-form information necessary to transform them into the fully functional, living Transformer beings. Often, protoform modes are used to transport Transformers on intergalactic journeys.

Protoforms are often contained within stasis pods and dropped into unexplored worlds. The Axalon carried many such stasis pods for exploration reasons. When a Protoform lands, it scans for compatible life-forms. When a suitable lifeform is found, the Protoform is reformatted by hitherto unknown means as its creation is completed by this process.

The atmosphere of the Planet Gaea could caused the protoform from the Beast Wars II to rust.

Note: Given that the Autorollers were apparently extant veterans, this would be a case similar to that of Airazor, in which an already living Cybertronian had been downloaded into a new Protoform body, yet awaiting to complete their return by either scanning a new form or by the work of experts.

Protoforms are the first step in most (if not all) Transformer lifes. Convicted criminals are sometimes reduced to Protoform state, such as the Combaticons.

Autobots (and possibly Predacons) can change into a Protoform state during long journeys, presumably to conserve energy. Attributes of an Autobot's original form remain in whatever new form the being takes. For instance, Scourge retained the ability to detect O-Parts.

A downside to the Protoform process is that it leaves the Autobot vulnerable to tampering, and, thereby meaning, effectively reprogramming. Megatron was able to use his Spark's energy to turn a crew of 6 Autobot Protoforms into his new loyal soldiers, and the Autobots' 'vehicular' counterparts. The Decepticons

Protoforms are established as the first stage of Transformer life, which is usually followed by Primary programming.

Protoforms in this continuity are more than just the first stage of a Transformer's life, they are the "base" form that exists down inside each Cybertronian. Protoforms are made of an ultra-dense, liquid metal material and are extremely hard to damage.

In the rare case they are not actively practicing their natural proclivity for chameleon-like disguise (usually only when engaged in interstellar travel), Transformers shed their exo-structure and return to their Protoform state. This state is capable of transforming into its transition form: an armored, cometary shape capable of interstellar travel. Upon landing on a new world and transforming back into a Protoform, the Transformer immediately begins trans-scanning for new alternate forms to adopt. When one is chosen, the Protoform draws on its own ultra-dense substance and any extraneous matter nearby to generate a new exostructure disguise.

The Autobot Protoforms resemble humanoids while the Decepticon protoforms look like monsters.

Revenge of The Fallen

In the final battle, many Decepticon Protoforms joined the battle without scanning an alt-mode. One of the Protoforms was killed, with the head removed. Another one destroyed two of the Arcee's before being killed by Ironhide and the rest were presumably killed in the carpet bombing.

Dark of The Moon

Several Protoforms took part in the battle in Chicago after being transported to Earth from the moon via space bridge, but all were killed by the Autobots and N.E.S.T. Dark of the Moon 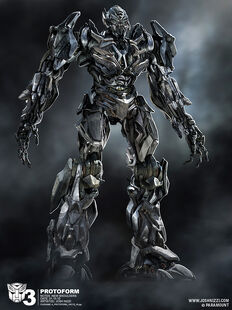 Originally, the Protoforms were under the care of Yoketron (As evident when 17 were in his care in his shrine in a flashback in Five Servos of Doom) until his former pupil Lockdown mortally wounded him in an act of betrayal as he makes off with the Protoforms as Megatron requested. Luckily, only 1 remained, and, returning to him in time, Prowl used that last one to revive his master, but Yoketron told him not to sacrifice the future to save the past, choosing to forcefully extinguish his own Spark rather than live on stolen life. Five Servos of Doom The Protoforms ended up in Megatron's ship, remaining intact after the ship got heavily damaged and later crashed on the Moon. Transform and Roll Out! Starscream later takes advantage of these Protoforms to create an army in his own image, using the first 2 as booby trap decoys to take out both sides. Fistful of Energon He then creates a team of 5, giving them actual life with fragments of his Allspark shard. A Bridge Too Close, Part I Eventually, Megatron takes advantage of the Protoforms to create the 3 Lugnut Supremes. Endgame, Part 1 After the battle, only 3 of the Protoforms remain intact as they are brought back to Cybertron. Endgame, Part 2

In the case of Sari, her origins are a mystery, as her Protoform somehow ended up in Prof Sundac's lab, more child-like compared to the other Protoforms seen in the series. But like the Beast Wars series, Sari scanned her father's genetic signature to assume her current form, believing herself to be an actual human until the truth begins to reveal itself. After hearing Prof Sumdac's explanation, Prowl pieced the pieces together and explains Sari's nature. TransWarped This ironically proves 2 of Prof. Bulkhead's theories correct: The first being "that she came to earth in an egg" and the second being "she's really a robot". Return of the Headmaster It has yet to be revealed how she even ended up at Sumdac's lab or who dropped her there.

In the series, "Protoform" can be used as Cybertronian slang, translating roughly to "baby" or "kid". According to Bumblebee, Megatron eats them for breakfast, which roughly translates as Megatron being feared by Cybertronian children. Transform and Roll Out! Also, Ratchet refers to Sari as a Protoform, suggesting that Protoforms are an early stage in a Cybertronian's life cycle that is similar to childhood. Lost and Found. Prowl also said to Captain Fanzone that every Protoform's elemental programing includes learning ninja nerve blows, which is why they were teaching them to Sari Sumdac. Survival of the Fittest When Ratchet yelled at Carlee and Spike, he said he wasn't a "taxi service for unprocessed Protoforms" (Cybertronian: unborn babies). Garbage In, Garbage Out Apparently, different Transformers could also be created by the same Protoform templates, a fact that could explain similarities in body form and transformation schemes (or, in real life terms, retoolings and redecos). Autoboot Camp

After arriving at the remains of the Harbinger, Starscream found an intact laboratory with 5 unused Protoforms. Starscream then created 5 exact duplicates of himself out of them by implanting some of his own Energon into them; however, the 5 contain functioning transformation cogs, where as Starscream does not. The Starscreamicons were then sent to the Nemesis to exterminate Megatron. They managed to board the ship, but 1 was killed by Bulkhead, who also somehow wound up on the ship. It was at this point that Starscream learned that he could feel the pain and suffering his creations felt, implying that Energon extracted from another Cybertronian and used by the Protoform to influence its creation establishes a wireless link between the Cybertronian and the Protoform.

Later, the remaining 4 were able to nearly kill Megatron, but were interrupted by the arrival of swarms of Insecticons, controlled by Airachnid from afar. During the confusion caused by their attacking the ship, Megatron was able to kill 3 of the 4; the last was able to escape Megatron and later the ship after its power core was destroyed by Bulkhead.

This clone then returned to Starscream, where it not only reported its failure but also tried to kill him. However, Starscream had been aware of the treachery and was able to kill it before it could do the same to him, thus feeling extreme pain. Armada

Toys representing transitional Protoform modes have been made for several characters from the live-action Movie universe:

Retrieved from "https://transformers.fandom.com/wiki/Protoform?oldid=429617"
Community content is available under CC-BY-SA unless otherwise noted.