Start a Wiki
Project Chimera is a secret technological initiative project on Earth sponsored and launched by MECH. This project is an attempt to create a new generation of robotic weapons in the form of living machines that are based on advanced Cybertronian technology under MECH's control.

"The power of living machines will, some day soon, belong to MECH!"

MECH's project was ruined when Silas was fused inside Breakdown's body. Silas thanked MECH for their efforts but he killed them all to side with the Decepticons, which ended in his own demise.

After encountering the Autobots, operative Silas began plans at acquiring a living Transformer in order to dissect it and use its components to create such machines that would serve MECH. To that end, they ambushed a battle between Breakdown and Bulkhead just after the latter was incapacitated. Before Breakdown could bring the killing blow, MECH neutralized him and abducted the winning Decepticon so that they could study him. Taking him to their hidden base, they switched off his pain receptors and began the process of dismantling him for parts, from which they uncovered much on the captured Cybertronian. However, Team Prime intervened in order to deny Cybertronian technology from MECH, and Bulkhead succeeded in freeing his foe. Despite MECH's attempts at reacquiring the test subjects, they were forced to retreat when Starscream arrived on the scene. Thus, the organization was forced to "sanitize" their hidden base, but they had managed to transfer much of the newly acquired data to a separate facility, despite the loss of the test subject. In his report, Silas commented that the diagnostics on Breakdown's vital components had allowed MECH to begin Project Chimera, which would allow them to gain the power of living machines that would serve them.

The knowledge MECH had gained allowed them to build a robot of their own. They acquired the last component they needed, a T-cog from Bumblebee, however its installation into the robot didn't have the desired effect. The robot was unable to transform, which according to Starscream was because they required energon for it to run on.

They obtained some, but during the second test, Bumblebee interrupted the operation and tore the robot apart to get his T-cog back. It was promptly abandoned by MECH.

The project finally culminated in the creation of Nemesis Prime, a robot controlled remotely by Silas. They immediately began using it to attack military bases near their secret hideout, which naturally attracted the attention of the Autobots. Silas attempted to use Nemesis Prime to take out the Autobots, but was distracted at a crucial moment by Agent Fowler, spelling the end of the project. 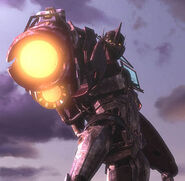 Retrieved from "https://transformers.fandom.com/wiki/Project_Chimera?oldid=461741"
Community content is available under CC-BY-SA unless otherwise noted.