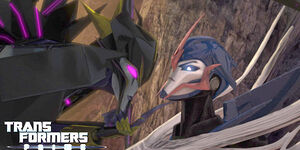 An unknown spacecraft lands on Earth from unknown boundaries from space, into a forest that Arcee and Jack investigate. Arcee recognizes the spaceship of who it belongs to and what it is, then tells Jack to ride her, then she stops and transforms again to find the marks of evidence of strange changes on the forest. Jack tells Arcee not to abandon him so easily because he claims he's her partner, but Arcee claims he is just a responsibility of hers.

A flashback plays where Arcee is trying to locate Tailgate, an Autobot ally but is trapped in webbing and chained in lightning locks and her face is burnt by a scratch from the Decepticon who kidnapped her.

From a first-person point of view, the Decepticon Airachnid sees Jack in a tent and prepares to attack him, but Arcee intervenes. Before the battle, another flashback plays where Arcee examines unknown alien species' heads decapitated by Airachnid as poacher's trophies on Airachnid's spacecraft. During a battle, Jack distracts Arcee, and she is trapped in webbing to a large rock.

Before Airachnid gets her chance to attack Jack again, Arcee cuts her left arm out and blasts Airachnid unconscious for a few seconds, then orders Jack to flee from Airachnid. Airachnid delighted by an opportunity for sport gleefully brags that she has the advantage in battle because Arcee is trapped and Jack is helpless, blaming that Arcee's habit of poor management in protecting partners.

Jack tries hiding from Airachnid, but she quickly spots him then he keeps on running simply and climbs down a cliff to climb up to another cliff then keeps running. Fortunately before, Arcee in motorcycle mode frees herself from the webbing and goes on the search. Airachnid complains that Jack is making it too easy as she is just slowly moving while Jack is running as fast as possible for his life.

Jack manages to lose her, with Airachnid believing he has gone into her ship. Jack finds leaking Energon from her ship, then with a knife and a stick, strikes them together to make a fire, waiting until it has enough mass to set the Energon in Airachind's ship on fire. The explosions destroy her ship, and it strikes Jack that he bounces off.

Airachnid uses her webbing to stick Jack into a tree, and just when she is about to cut him with her claws, Arcee arrives in at the last second and starts punching her, knocking Airachnid into a set of trees. However, Airachnid digs into underground escaping. Arcee then frees Jack, and announces that she is proud of him, agreeing she and Jack actually are partners.

Retrieved from "https://transformers.fandom.com/wiki/Predatory_(episode)?oldid=460390"
Community content is available under CC-BY-SA unless otherwise noted.