Relic hunter (by himself)

Slayer of Autobots (by himself)

"All hail Paralon, slayer of Autobots!"

Paralon is a scorpion-like Decepticon Relic hunter his robot mode has the same features as Scorponok. He once worked with a Mini-Con named Buzzstrike.

In History Lessons, after torturing another unknown Decepticon to get a map of Autobot Outpost Omega One, Paralon headed with Buzzstrike with the intention of salvaging any Cybertronian artifacts they could find. Setting up a bomb so they could break into the lower levels, the pair commenced searching the upper levels. They were discovered by Bumblebee and Sideswipe, leading Paralon to convince the reluctant Buzzstrike to link with him so they could fight the two Autobots. They managed to defeat the pair, along with Drift and his Mini-Con students, and Paralon opted to accelerate the countdown on the bomb and headed outside where he discovered a weapon half-buried in rubble. Sideswipe caught up with them and in the ensuing fight, Paralon was rendered unconscious. When he came to, he was furious to find Buzzstrike had sleep-walked him a safe distance from the base and hadn't even recovered the weapon.

In Strongarm's Big Score, Paralon was present with Thermidor in the dark when Scatterspike and Sawtooth returned to the Scavenger's ship.

In Mighty Big Trouble, Paralon and the other Scavengers tracked a signal to an automated vessel, where they found the Dark Star Saber, only for the Mini-Cons to run off in their sub-orbital craft, and for Starscream to arrive and claim the sword, using it to sweep them all into the sea.

In Mini-Con Madness, while searching to reclaim the Mini-Cons, the scavengers found their quarry had teamed up with Optimus Prime and Team Bee. Using the relics they'd recovered, the scavengers were able to hold their own, though when Strongarm and Sawtooth teamed up, Paralon came out worst off. The scavengers finally managed to trap the Autobots in a net only for Starscream to swoop in and snatch up the Mini-Cons.

In Worthy, thanks to Thermidor, the Autobots escaped their net and, with some help from Tricerashot, defeated the scavengers and they were all placed in restraints by Strongarm. 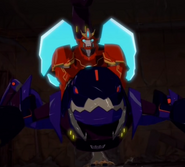 Add a photo to this gallery
Retrieved from "https://transformers.fandom.com/wiki/Paralon?oldid=455904"
Community content is available under CC-BY-SA unless otherwise noted.