Teletraan I: The Transformers Wiki
Register
Don't have an account?
Sign In
Advertisement
in: Character stubs, Armada characters, Autobots,
and 6 more

View source
The name or term Overload refers to more than one character or idea. For a list of other meanings, see Overload (disambiguation).

Who Overload is depends on which continuity you're looking at. Sometimes "Overload" is simply the name of the armored-up form of the Mini-Con Rollout. And sometimes he's a separate entity... um, okay, a separate entity who uses someone else to form his chest and head, but still.

Overload appeared suddenly as a trailer attached to the rear of Optimus Prime's container as the Autobot leader launched himself from the Axalon. Faced with the powerful Sideways-possessed clone Nemesis Prime, Overload powerlinked with Optimus' super mode to form a pair of massive shoulder-mounted cannons. Together, Optimus and Galvatron destroyed the monstrous marionette. Puppet

Later on Cybertron, realizing the threat of Unicron, Optimus Prime attempted to reach out to Galvatron and forge an alliance against the Chaos Bringer. As expected, the Decepticon leader refused, forcing Optimus to powerlink with both Jetfire and Overload to form Jet Magna Convoy. However, in this form he did not engage in battle with the similarly powerlinked Galvatron, instead using his power to lead the Decepticon away from battle. Cramp

After the formation of an alliance between the Autobots and Decepticons, Overload is seen standing behind Side Swipe and Hoist during a mission briefing. This was the only time he ever appeared in robot mode (with a blue face, like the US toy, instead of gray, like the usually-more-show-accurate Japanese toys).

Note: Overload was never given an introduction into the series, and never had any lines, so it is a mystery as to where exactly did he come from, though it was briefly shown with Red Alert working on the trailer.

Overload, flanked by Tidal Wave (who happens to form extra artillery for the Decepticon leader), engaged the forces of Unicron with some heavy Powerlinx artillery, using Prowl and Kingbolt in their pistol modes, plus Quench in his missile launcher mode. Linkage Part 13

Overload is a red and black carrier truck capable of carrying Jetfire in his vehicle mode. His robot mode, in which his Mini-Con, Rollout, acts as his head, is a heavily armed robot with a vague resemblance to Generation One's Ultra Magnus (thus the Japanese name) such as the gimmick of his shoulders, though it actually (according to the designer) has more details from the Action Master Rollout. Overload can be pulled by Rollout in his altmode, Optimus Prime's cab, or attached to Optimus' trailer to form a double trailer. Overload can also transform into a dual spring-loaded missile-firing cannon pack for Optimus Prime's super mode, and can also attach to Prime's trailer in its "base" mode.

Inserting Rollout into his chest cavity and pushing it into position to form his chest/head will press against a button, activating the Generation One transformation sound effect.

The Overload mold was reused for Energon Ultra Magnus, and was retooled by OTFCC for Universe Sentinel Maximus with a new head mold.

Overload and Rollout were cast in colored-clear plastics (dubbed "Ultra Magnus Special Clear Version"), and made available only in a Japanese Toys "R" Us exclusive multi-pack, coming with Optimus Prime in his "Final Battle Color Version" (aka Powerlinx colors), Corona Sparkplug, and an X-Dimension redeco of the Street Action Mini-Con Team.

100 samples of this "sky blue" redeco of Overload and Rollout were given away as prizes in a contest from the Japanese Tele-V Magazine in October 2003.

For this Costco-exclusive set, Overload (and Rollout) was redecoed into a predominantly yellow scheme with burgundy accents. He came with a new-deco version of Armada Optimus Prime and Sparkplug (who, despite his larger partner's new duds, remained pretty much the same).

Overload is a Redeco of Cybertron Defense Scattorshot. His accessories include a transparent green Earth Cyber Planet Key that when inserted into the two sockets in his arms activate three massive cannons and two missiles for the ones that fire.

This mold was also used to make Universe Dropshot. 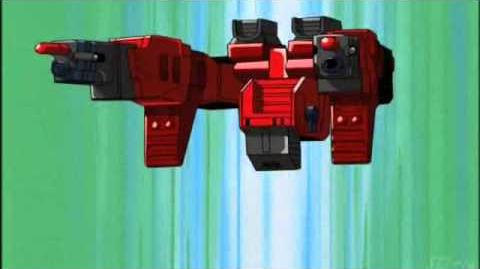