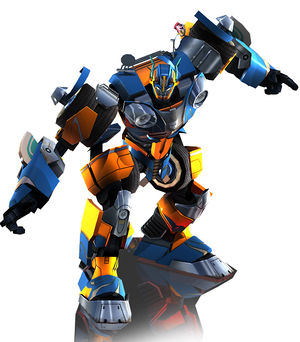 Outsider is an Autobot featured in the game Transformers: Universe.

Outsider seems to have not quite fully grasped Earth culture. Despite his eccentric choice of alt mode, he is a bit of an antisocial lone-wolf. You're more likely to see him using his unique abilities to trap Decepticons in a small arena and then teleporting behind them than sitting around having a Spark-to-Spark.

Outsider was among the Autobots who were on board the Arclight when it was shot down over Central City. He survived the crash and proceeded to take part in a series of battles against the Decepticons who had come to Earth aboard the Leviathan.

Retrieved from "https://transformers.fandom.com/wiki/Outsider?oldid=448846"
Community content is available under CC-BY-SA unless otherwise noted.