The following are images of Optimus Prime:

Bumblebee first meets Optimus and Ratchet.
Add a photo to this gallery

Optimus' truck form from the front. 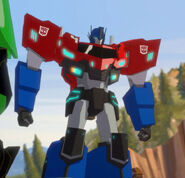 Optimus with the original members of Team Prime in the theme song.

Optimus in his upgraded body form along with the original members of Team Prime in the season 3 theme song. 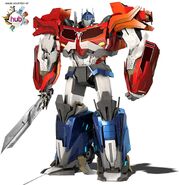 :O Must of watched a horror movie with the lights off

You see Miko?! They have no clue what Unicorns are!

No bro. I think she wants to Netflix and watch Bayformers

Wheeljack: So you use to be a nerd? I don't believe it. Optimus: I have been working out.

Optimus Prime is a SAVAGE!!!

When the squad gets roasted but no one is giving in.

You used to call me on cellphone

When the squad waits for you