View source
The name or term Optimus Prime refers to more than one character or idea. For a list of other meanings, see Optimus Prime (disambiguation).

Knight of Iacon
Leader of the Autobots

"A necessary sacrifice to bring peace to this planet. We cannot let the humans pay for our mistakes."
―Optimus Prime on deciding that he is prepared to sacrifice his life to destroy the AllSpark, Transformers

Optimus Prime (sometimes Nemesis Prime), is the leader of the Autobots. Long ago, he was the novice to the Great Sentinel Prime and the humble leader of Cybertron's science division, which studied the AllSpark and were protected by Lord High Protector Megatron's military. When Megatron was corrupted by the Fallen, Optimus discovered that he was the last of the Dynasty of Primes hidden away when the Fallen destroyed their lineage. In response to Megatron's attempts to seize the AllSpark and conquer other worlds, Optimus assumed his proper title and rallied the Autobots to stand against the Decepticons. Before the disappearance of Sentinel, Optimus is handed the leadership of the Autobots.

As obsessively as Megatron strives to achieve his objective, Optimus is equally as dedicated to stopping him even at the cost of his life, his world and - if necessary - his own people. It was on his order that the AllSpark was jettisoned into space, dooming Cybertron to a slow death and his people to a nomadic life. The sacrifices he has made weigh heavily on his spark, but they must be done for there is no other choice. He knows the ambitions that lurk in his brother's spark and they must never see the light of day. Lives must be kept free from the threat of Megatron's tyranny, no matter the cost. This obsession with the defeat of Megatron has robbed Optimus of some of his early idealism. This has created a certain ruthlessness beneath his otherwise honest and caring personality. Prime is not one for second chances and is willing to consider any action that might lead to victory, short of directly sacrificing those he cares about.

Optimus is kind, caring, selfless, serious, highly intelligent, calculating and wise. He has a strong sense of justice, honor and good morals. On the battlefield, he is a great fighter, leader and tactician. He can be cold and ruthless towards his enemies, but he also has a sense of compassion for enemies who were turned from the right path. Optimus is very mature, calm, level-headed and patient, as he rarely loses his temper. Despite humanity's primitive state compared to his own race, Optimus often defends them by arguing that he sees their potential to be better rather than focusing on their flaws (even if this faith experienced some knocks after humanity rejected the Autobots following the destruction of Chicago). His affection for humans has also been shown in his admiration of them; when introduced to Buzz Aldrin, one of the first human beings to set foot on Earth's moon, Optimus accepted the astronaut referring to them both as space travelers despite his far greater time in space, acknowledging it as an honor to meet the man who had done so much by humanity's standards before they officially began collaborating with the Autobots.

As the last of the Primes, Optimus is one of the most, if not the most powerful cybertronian. 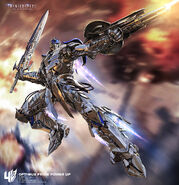 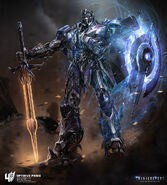 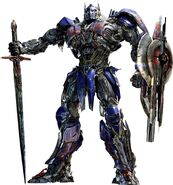 The name or term Optimus Prime refers to more than one character or idea. For a list of other meanings, see Optimus Prime (disambiguation).