Start a Wiki
The name or term Optimus Prime refers to more than one character or idea. For a list of other meanings, see Optimus Prime (disambiguation).

Optimus Prime is an Autobot from the Transformers: Cyberverse continuity.

―Optimus Prime? Of course I know Optimus Prime, he's legendary! He and I are actually close personal friends.

Optimus Prime is the legendary and noble leader of the Autobots. Considered a hero by his fellow Autobots, he is the best leader they could ask for and a Decepticon's worst nightmare. At one time, Prime was friends with Megatron, but their paths soon diverged to being on opposite sides of the war. Prime and Bumblebee are close friends, with Bumbleebee acting as his right-hand bot.[1] 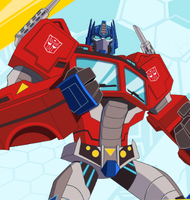 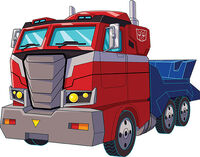 Retrieved from "https://transformers.fandom.com/wiki/Optimus_Prime_(Cyberverse)?oldid=431195"
Community content is available under CC-BY-SA unless otherwise noted.