"Uh, first this Earth fluid, with all the cold and the salt, and now Autobots?"
― Octopunch encountering Bumblebee and his team in Deep Trouble.

Octopunch is a Decepticon who resembles an octopus, which is an animal in Earth's oceans. Octopunch's personality and gangly appearance should not be messed around with. He's a formidable opponent, especially in water. His tentacles allow him to take on multiple opponents at once. He is known for raiding downed ships and other vessels to salvage whatever was left for his own. Octopunch's alt mode is a submarine that helps him explore the depths of deep oceans, like what Earth has.

Octopunch was imprisoned and placed aboard the Alchemor but he escaped when the ship crashed on Earth. He began searching through an ocean in his alt submarine mode and eventually located a crashed cybertronian space ship underwater. While trying to remove some rocks off of the ship with his tentacles, Octopunch was intercepted by Bumblebee and his team. Octopunch easily overpowered them with his fighting combat skills and tentacles before entering the ship through a hatch. Once inside, he was able to activate the ship's exterior security systems on the Autobots. As Octopunch was ready the ship's systems to fly, he soon detected the Autobots inside the ship, which prompted him to activate the vessel's defenses to hamper their efforts as he activated the ship's four engines one by one.

Octopunch managed to trap a majority of Bee's team but was later confronted by Bumblebee and Grimlock. He was able to spray them both with his ink and attack them by smacking them around with his tentacles. However, Bumblebee managed to grab Octopunch's tentacles and tie them around the room, which enabled Grimlock to punch Octopunch until he was unconscious. The Autobots manage to make the ship self-destruct and escaped while carrying Octopunch out back to the scrapyard via Groundbridge. They returned home where Octopunch was placed in a stasis pod.

In Lockout, Steeljaw and his pack manage to break into the scrapyard where Steeljaw was able to get Fixit in opening the stasis pods. Octopunch's stasis pod was deactivated and Strongarm was trying to get Octopunch's tentacle back into the stasis pod. He was quickly re-frozen again by Denny Clay, who managed to get the Autobot's systems to shut down the stasis pods, thus preventing Octopunch from escaping.

Octopunch's robot mode is mostly based on an Earth octopus. He has two crab like eyes, eight tentacles, and octopus like exterior. His face is colored white, his body is a reddish orange, his tentacles are light blue colors, he has a yellow piece on his back, and two purple Decepticon shoulder symbols. He transforms into an Earth-based submarine.

Octopunch is able to transform into an Earth-based submarine that allows him to travel underwater. Octopunch also has the advantage of having eight limbs at his command and will. He is able to spray ink out of them to blind and slap his enemies around, including Autobots. His tentacles are also sensitive to changes in light, pressure, temperature, and energy signature. 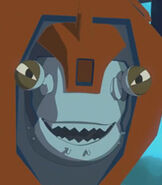 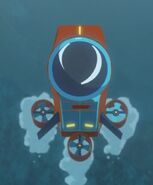 Octopunch is defeated.
Add a photo to this gallery
Retrieved from "https://transformers.fandom.com/wiki/Octopunch_(RID)?oldid=456145"
Community content is available under CC-BY-SA unless otherwise noted.