Start a Wiki
The name or term Nemesis refers to more than one character or idea. For a list of other meanings, see Nemesis (disambiguation). 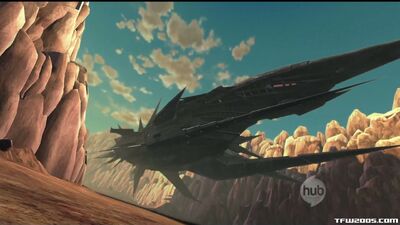 The Nemesis, is the Decepticons immensely powerful flagship. It is very heavily armed with an arsenal of high-powered Energy cannons. It is also Megatron's personal warship. It is used as the Decepticons' base of operations on Earth and in its orbit. In mining operations, it hovers above the pit and takes in the gathered Energon ore through a Magnetic lift that extends from the hull. And, for its size, it is a very fast ship.

The Nemesis is a massive warship. The bow of the ship is pointed and upturned like the hull of a boat. There are two pointed prongs protruding from the bottom of the bow at an angle. The bow also possesses two red view ports that resemble eyes on the sides of the bow. The ship is covered in numerous wings and vanes. The dorsal surface of the ship is a large, long, flat area that serves as a flight deck, similar to that of modern aircraft carriers, with a hanger bay entrance towards the front of the ship. The ship propels itself with eight engines on the rear section of the vessel.

For defensive purposes, the ship has numerous gun turrets on the dorsal surface of the hull. There are also stasis beam cannons attached to both the dorsal and ventral surfaces of the hull. The communications array for the ship consists of numerous dishes located on the dorsal hull. The ship also possesses a magnetic lift that extends from a hatch on the ventral hull. The lift can be used to collect cargo, such as energon cubes or allow troops to be picked up from combat. Numerous hatches on the dorsal surface allow troops and crew to access the outside of the ship in order to make repairs or repel attacks.

The Nemesis is first seen hovering over the energon deposit that is found by Cliffjumper. After Cliffjumper is beaten, he is taken to the ship and executed by Starscream. Darkness Rising, Part 1

Later, when Agent Fowler is kidnapped by the Decepticons, he is taken to the Nemesis and tortured for information. The Autobots then stage a rescue where they infiltrate the ship to save Fowler. While on the ship, the kids find evidence of the Decepticon space bridge and bring it back to the Autobots. During the rescue attempt, Bulkhead damages the Nemesis's deep space transceiver.

The damage to the transceiver forces the Decepticons to use Earth-based telescopes to target Cybertron so that Megatron can fulfill his plan to use Dark Energon to resurrect all of Cybertron's dead. The ship rendezvouses with the space bridge and Megatron launches the Dark Energon crystal through the vortex. But before the legion of the undead are able to exit the vortex, the space bridge, and presumably Megatron with it, is destroyed. Darkness Rising, Part 5

Out of His Head

After falling into an energon deposit ready to be taken by the ship and knocked out, Bulkhead was unintentionally taken on board the Nemesis. Five Starscream clones were also sent to the ship by the real Starscream to kill Megatron; one was killed by Bulkhead, and the others were able to reach him, and were about to kill him when the ship was assaulted by Insecticons, sent by Airachnid. Megatron then killed three of the clones and went on top of the ship to help several Vehicons in combating the Insecticons. After Airachnid was put into stasis, though, the Insecticons fell under Megatron's command.

While this was going on, Bulkhead began wandering around the ship, eventually locating its power core. He then proceeded to destroy it, resulting in the Nemesis being grounded near a canyon. Armada

Megatron then attempted to reactivate the ship's power core by feeding it Dark Energon, which Megatron thought would result in him being able to control it with his mind. However, he later found out that the ship actually came to life and his old form was Trypticon when both a stasis cannon appeared on it and paralyzed the Autobots and when it diverted its path away from the Spark extractor. It then began to translate the Iacon database that had been downloaded onto the ship, and paralyzed anyone that got in the way of its mission, even Megatron.

In order to combat this, Jack, Miko, Raf, and Agent Fowler were GroundBridged on board the ship. Unable to detect carbon-based life forms at the time, the humans were able to sneak past the ship's security systems, as well as beginning to download the Iacon database onto a drive.

After Agent Fowler was knocked out, the remaining humans made it to the ship's power core, where the Nemesis was finally able to detect them and used the crane that normally fed energon into the core to try and eradicate them. However, Jack was able to trick the crane into hitting Megatron, which caused him to fall over and for the Dark Energon to be deposited out of the core.

The humans minus Jack were able to escape before the Decepticons, who were emerging from their stasis-like states, were able to regain their senses; Jack only remained behind to retrieve the drive. However, Knock Out, who was manning the computer at the time of his paralysis, noticed him and attempted to kill him, but was knocked out by Ratchet. Flying Mind

Retrieved from "https://transformers.fandom.com/wiki/Nemesis_(Prime)?oldid=460299"
Community content is available under CC-BY-SA unless otherwise noted.