NAVI is a computer AI from the Beast Era portion of the Generation One continuity family.

A NAVI is a type of shipboard artificial intelligence used in Maximal and Predacon starships during the Beast Era. NAVIs possess limited autonomy of action—more than a "dumb" computer system like Sentinel, but less than a self-aware drone. This does not prevent them from possessing what might be termed an excess of personality, often forming strong attachments to their ship's crews or definite opinions that can shape how they choose to interpret orders. Typical NAVIs have the voice and intonation of cute little girls, though their personalities can range from stoic robots to demanding bitches.

Ambulatory NAVI units such as the one designed by Skywarp can sustain a NAVI's existence even after the ship housing its data banks has been destroyed.

The Predacon computer on board the Darksyde was referred to as "NAVI-ko" by Megatron and the other Predacons.

Note: This is true only for the Japanese dub, in which the computer demonstrated a decidedly different personality than in the English version.

NAVI-chan was the computer for Lio Convoy's space craft, the Yukikaze. She originally had no corporeal form but was given a small, hovering LED screen for a body.

The NAVI for Big Convoy's ship, the Gung Ho, was virtually identical to NAVI-chan, save for having different colors for her LED body.

The Predacon ship, the Dinosaur, on the other hand, had DNAVI (short for Devil NAVI). 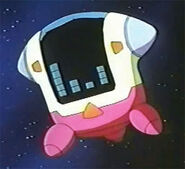 DNAVI (Beast Wars Neo)
Add a photo to this gallery

Retrieved from "https://transformers.fandom.com/wiki/NAVI?oldid=460291"
Community content is available under CC-BY-SA unless otherwise noted.