Misfire is the kind of guy you want on the Decepticons' side—if you're an Autobot, that is. He couldn't hit the broad side of Broadside. He holds the record for enrolling and failing the Decepticon Military College, only graduating because the Autobots blew it up. He claims his aim is getting better. What was it like before?!

Together with his Targetmaster partner Aimless, he's a danger to himself and others. Mostly others. 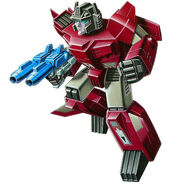 Misfire was one of several Decepticon jets serving under Scourge and Cyclonus when they attacked Autobot City as part of a division while the Decepticon Clones stole the Key to the Plasma Energy Chamber. After Scourge successfully activated the chamber on Cybertron (and inadvertently sent a shuttle full of Autobots and the key halfway across the galaxy), Misfire, Triggerhappy, and Slugslinger were among the Decepticon unit sent to retrieve the key. Following the Autobots to Nebulos, Misfire, alongside Cyclonus and Scourge, blasted both Sureshot and Crosshairs. The Rebirth, Part 1

After being soundly trounced by the new Autobot Headmasters, the Decepticons made a deal with the Hive to donate their heads and weapons for the binary bonding process. Misfire liked his partners to have short, memorable names. Armed with this new skill, Misfire and his Targetmaster companions successfully helped reacquire the Chamber's key...though Misfire himself and Aimless didn't really do very much that was helpful. To anyone. The Rebirth, Part 2

Triggerhappy and his partners, Misfire and Slugslinger, were frequent opponents of the Autobot trio under Pointblank's command. While they were all engaged in combat over several space-faring denizens of planet Master, a massive explosion caught everyone off-guard. Triggerhappy and his partners and foes alike were transformed into Targetmasters, somehow fused together in pairs with each of the smaller Master Transformers by the explosion. Miraculous Warriors, Targetmasters (Part 1), Miraculous Warriors, Targetmasters (Part 2), The Master Sword Is in Danger!!, The Zarak Shield Turns the Tide, Operation: Destroy the Destrons, Duel on the Asteroid, The Final Showdown on Earth (Part 2)

For some reason, when Scorponok was choosing troops who might benefit from being re-engineered as a Targetmaster with greater shooting ability, he thought of Misfire. Brothers in Armor!

After the Autobot Highbrow stole Scorponok's head, Misfire led a group of Decepticons to recover their leader. Almost immediately after getting Zarak and Scorponok reattached, Misfire and his companions were cast into limbo to make room for the time-traveling Soundwave and Terrorcons from 2009. Time Wars

Misfire was damaged to an unknown extent when a surface-to-air cannon manned by Finback overloaded and exploded. Seeing as they were fighting Unicron, and Misfire was never seen again after that point...well, fill in the blanks. On the Edge of Extinction!

Misfire is one of the six stranded Decepticons, and apparently, he can siphon energy. He appears to have ADHD.

Misfire transforms into a pink Cybertronian car-jet thing that goes real fast. Hopefully he can steer better than he can aim. Funnily enough, unlike Triggerhappy and Slugslinger, Misfire is totally unarmed in vehicle mode unless Aimless is attached to him. Just as well, really. Misfire is one of the best Targetmasters in robot mode due to his clearly defined legs with hip and (however awkward) knee articulation coupled with good arm articulation, making him one of the small number of Generation One toys of this era that isn't a brick.

Retrieved from "https://transformers.fandom.com/wiki/Misfire?oldid=485552"
Community content is available under CC-BY-SA unless otherwise noted.