Miracle is the forty-second episode of Armada. It first aired in the United States on October 31, 2003 on Cartoon Network.

Autobots wage their battle to destroy the evil forces of the Decepticons... IN SPAAAAAACE!!!

Aboard the Autobot spaceship Axalon, Alexis and her friends look back on Earth as they head towards Cybertron. Fred eats some chocolate and Billy cries that he forgot his video camera. On the bridge, Hot Shot and the Autobots salute Earth and the memory of Optimus Prime. On the Decepticons' ship, Megatron orders the ship to be turned around so the Autobots can be destroyed. Sparkplug, still holding Prime's Matrix, meets with several Mini-Cons. Moments later, hundreds of glowing lights swarm around the Autobot ship. High Wire - in English - introduces the lights as Mini-Con friends. After the swarm of Minis are introduced, the Street Action Mini-Con Team trigger a flashback in the humans to that time they saw a big evil in cyberspace. High Wire names the evil Unicron. Blurr tries to pilot the Axalon through an asteroid field. In the thick of the space debris, the Decepticons start their attack. Alexis notices the Mini-Cons also running to help the Autobots in the battle. Thrust fights against Jetfire, Cyclonus fights against Blurr, and Starscream and Hot Shot continue their long-standing grudge. Scavenger erotically battles against Demolishor. Megatron easily overpowers Side Swipe.
When Megatron aims the Requiem Blaster at the Axalon, Hot Shot stands in his way. Meanwhile, on the Axalon's hull, Perceptor and Sparkplug present The Matrix to the swarm of their gathered friends. Several Mini-Cons plunge into the Matrix, where something begins to take shape. Megatron degrades Hot Shot, but a large sphere of green light swoops around and knocks Megatron aside. To everybody's astonishment, Optimus stands alive. With a Max Flare, Optimus ruins the Decepticon's attack. At the end of the episode, Megatron is glad that Optimus is back.

"I'd never thought I'd say this, but it's good to have you back, Prime."

— Megatron, pleased that his old foe is alive

so first this happens, and then nine months later, a Prime pops out like this. 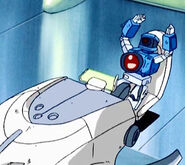 "Don't shoot! I don't know anything about Anonymous!"
Add a photo to this gallery

Retrieved from "https://transformers.fandom.com/wiki/Miracle?oldid=460258"
Community content is available under CC-BY-SA unless otherwise noted.