Minitron is a tiny Decepticon Cyber-Tick with the ability to attach himself to other Cybertronians and control them.

Minitron was one of the Decepticon prisoners on board the Alchemor before the ship crashed on Earth. Eventually, Minitron met up with Steeljaw and was soon involved in Steeljaw's plan. Minitron attached himself to Grimlock so that he can control the Dinobot and retrieve the Decepticon prisoners that the Autobots have captured for Steeljaw. Minitron controlled Grimlock into attacking the other Autobots and to steal a stasis cell containing Underbite. After bringing Underbite directly to Steeljaw at the Crown River Dam, the Autobots managed to catch up with Minitron, Grimlock and Steeljaw. While Steeljaw escaped with the stasis pod, the Autobots attempted to take down Grimlock. Grimlock was able to hold up but was soon tied down. After Fixit and Russell told the Autobots about Minitron, they attempted to find Minitron on Grimlock. Minitron tried to escape by controlling Bumblebee, Strongarm, and Sideswipe. As Minitron attempted to return to Grimlock, the Dinobot managed to catch Minitron and decided to throw Minitron at a wall to incapacitate him rather than squish him. Minitron was placed in a small stasis pod. 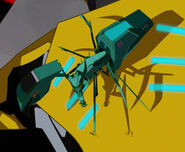 Add a photo to this gallery
Retrieved from "https://transformers.fandom.com/wiki/Minitron?oldid=456419"
Community content is available under CC-BY-SA unless otherwise noted.