The name or term Megatron refers to more than one character or idea. For a list of other meanings, see Megatron (disambiguation).

Megatron is a Decepticon from the Transformers: Cyberverse continuity.

Leader and Founder of the Decepticons

"Megatron is bad news Ruthless, cruel, and -- how do I say this nicely -- evil to his core. I can't believe Optimus Prime was ever friends with this guy."
―Bumblebee

Megatron is the tyrannical leader of the Decepticons. Ruthless, cruel and evil, Megatron seeks to conquer Earth and achieve Decepticon dominance. He used to be friends with Optimus Prime, but Prime now stands opposed to him and his corrupt plans.[1]

Megatron was once a gladiatorial champion on Cybertron. Through his popularity as a gladiator, he was able to amass a large amount of admirers. When Megatron began transitioning into a political life, his speeches were written by a young data clerk named Optimus. During a rally, Megatron decided to name his movement the "Decepticons", promising a new Cybertron defined by equal rights for all citizens. Eventually, Megatron's power and influence corrupted him, shifting his personality into a more aggressive and destructive one.

One of his first actions as leader of the Decepticons was carrying out the execution of the Autobot High Council, headed by Alpha Trion. 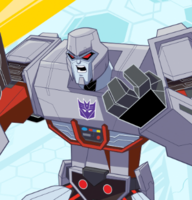 Retrieved from "https://transformers.fandom.com/wiki/Megatron_(Cyberverse)?oldid=484873"
Community content is available under CC-BY-SA unless otherwise noted.