Masterpiece is a high end toyline created by Takara to update a character's G1 toy with today's advanced engineering techniques. "Masterpiece" Transformers tend to be very expensive. Currently, the Masterpieces appear to be on a bi-yearly rotation, with a new being released in the spring or the fall.

This is a representation of Convoy from Fight! Super Robot Lifeform Transformers and The Transformers: The Movie.

A representation of Optimus Prime from The Transformers and The Transformers: The Movie. Hasbro released this to commemorate the 20th anniversary of the Transformers franchise, it comes with shortened smokestacks and replaces some of the die-cast part with plastic.

Version that includes a DVD

Last chance for MP-01 at retail.

White re-coloring of MP-01, representation of G1 Ultra Magnus without the trailer/armor.

This toy is designed by mechanical designer Shoji Kawamori who had designed some of the original Diaclone toys, including F-15 Robo which would become Starscream and the rest of the seekers, he also famously designed the VF-1 Valkyries which Habsro recolored as Jetfire. It was designed to resemble a real-life jet hence the dark gray color scheme, there is a lot of kibble used to cover up the robot parts to form a streamlined fuselage such as the parts of the rear fuselage that hang off the hips like sheaths.

He comes with a non-transforming Megatron gun, so one can re-enact the several moments in the series where he fired Megatron in gun mode, and a stand that can support him both in aircraft mode and robot mode (as he is very prone to falling over).

In fighter mode, he has a height of 10 cm, a length of 33 cm and a wingspan of 22 cm, these dimension make him fit nicely with 1/60 scale model aircraft. All the redecos (such as the other seekers) and the re-tools (such as MP-11) have the same dimensions.[1]

For the American release, Hasbro had recolored MP-03 based on his G1 toy design (with a blue nosecone as opposed to a gray one like in the show), no changes were made to the engineering, however.

Cast in clear plastic to depict his "ghostly" visage.

A re-release of MP-01 that comes with his iconic trailer as well as Roller.

A redeco of MP-04 to resemble the deathbed scene from The Transformers: The Movie, the trailer is made from transparent plastic give a ghostly effect. There are weathering effects on this version with tints to his red and blue color-scheme as opposed to totally gray/black colors like Black Convoy to place emphasis that this is a dying version.

The Hasbro release of MP-08 came with a crown, gun and sword.

TakaraTomy re-release of MP-08 with the accessories provided in the Hasbro version.

An entirely new mold, comes with scaled Roller and a trailer too. Each of the Masterpiece Autobot Cars that come following this toy are scaled such that they can fit in the trailer.

A redeco of MP-10 in Eva Unit-01's green and purple color scheme as part of the TRANSFORMERS MODE EVA crossover series. His trailer is white with red NERV livery. Roller also has a yellow NERV logo on him. Convoy can store a red-colored matrix inside his chest and has a red NERV logo on his right shoulder.

This is a retool of MP-03 Starscream. MP-11 removes a lot of the kibble that provided the streamlined vehicle mode accurate to an F-15 Eagle and instead provides a robot mode as accurate to the television series as possible. Accuracy to the series in vehicle mode has also been improved e.g. the nosecone is gray, following the show appearance rather than a blue like the original G1 toy. The tail fins are now part of the legs. The feet are completely re-molded and viewable jet engines also serve as heels for Starscream in robot mode, providing better balance. Starscream no longer has detachable missiles; instead, his Null-rays are attached to his arm on small pieces connected to ball joints which attach to his wings in aircraft mode, this allows you to transform Starscream without taking anything apart, not even the weapons.

MP-11 comes with new accessories such as a crown and a foldable cape, as seen in The Transformers: The Movie, although he lacks to stand that allows you to display him in aircraft mode.

MP-12 is a representation of Sideswipe, he can transform into an accurately detailed and officially licensed Lamborghini Countach L500S.

Redeco to represent Tigertrack, the yellow diaclone variant of sideswipe.

Bumblebee with Spike in an Exosuit. 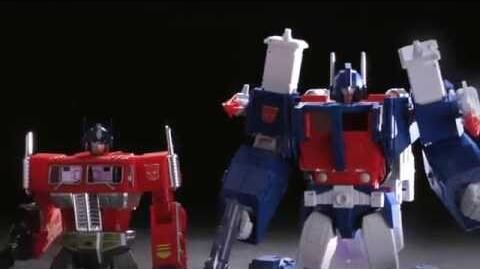 An entirely new mold to depict Ultra Magnus accurately in accordance to the television series (even a red bumper) The cab is scaled to match MP-10 Convoy but it does not transform into the "inner robot". However h

Like MP-10, the Autobot Cars can fit on to his trailer and the ramps can be adjusted to allow the cars to exit.

Accessories include the Matrix of Leadership, removable hands that allow him to hold the matrix as he did in the movie. All of his weapons are included including his super blaster gun. Spike and Daniel Witwicky figures are also included.

His collector's coin folder is designed to look like his chest and the inside matches his waist (although the crotch piece is upside down.

Included the box is a "History of Ultra Magnus" showing his toy incarnations from all series; from G1 to Car Robots God Magnus, to Micron Legend Ultra Magnus (who was renamed into Overload in the Armada dub) to Fall of Cybertron and beyond.

A redeco of MP-20 with a new head. Exhaust is a new character based on the Diaclone toy that would become Wheeljack. He has a Decepticon insignia.

In July 2013, Takara Tomy held a Masterpiece Fan's Choice poll to determine which character would get a Masterpiece toy. The candidates were:

MP-24 is the largest Masterpiece figure to date and also implements the Brainmaster gimmick present in the Victory franchise (although the face is part of Saber not the Star Saber brainmaster which merely pushes the existing face up into the head).

A Redeco of MP-25 to represent Road Rage.

A new mold to represent G1 Hot Rod. Unlike MP-09, he cannot be converted into Rodimus Convoy.

Accessories he comes with include:

Hot Rodimus can also store mp-10's leadership of matrix in a compartment he can open like a door in his chest.

A representation of a G1 Cartoon stylized shockwave, he was revealed as a grey prototype, along with mp-28's reveal, at a Takara exhibition display on September 25, 2015. Mp-29 comes with a head with light piping and a battery pack to have a blast sound effect and light effect in blaster mode

A remold of MP-27 Ironhide to represent mp-30 Ratchet. This toy represents g1 ratchet and was first announced November 6, 2015. This toy transforms into a Nissan Vanette Ambulance, and includes a "sled" to hold all the accessories to homage the original toys sled that ratchet would transform with.

MP-31 Delta Magnus is a redeco of MP-22 ultra magnus to homage the early animation model of Ultra Magnus, itself based on Diaclone Powered Convoy.

A representation of Beast Convoy.

Retrieved from "https://transformers.fandom.com/wiki/Masterpiece?oldid=460220"
Community content is available under CC-BY-SA unless otherwise noted.