Toxin spray in his tail

"We may not be built for speed, primative one, but we are built for the dismantling of Autobots."

Malodor is the leader of a gang of Skunticons. Like his comrades, he has the ability to spray a toxin which disorients the target's sensors, plunging them into a state of confusion.

Malodor and his cohorts were prisoners who were placed on the Alchemor when it crashed on Earth.

In Out of Focus, they eventually left their stasis pods and went to the Crown river dam where they encountered Bumblebee and his team. The Skunkticons sprayed the Autobots with their gas from their tails and Malodor ordered his members to take Grimlock as hostage. Their plan failed when Grimlock managed to break free. Malodor fought against Bumblebee in the Crown river dam's control room until Grimlock accidentally damaged the controls. Malodor threw Bumblebee aside and sprayed Sideswipe and Strongarm before escaping with his group. However, the Autobots soon caught up with the Skunticons and the Skunticons were captured. 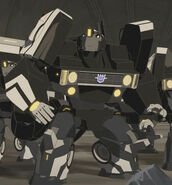 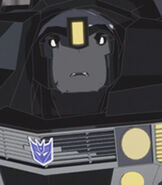 Add a photo to this gallery
Retrieved from "https://transformers.fandom.com/wiki/Malodor?oldid=456141"
Community content is available under CC-BY-SA unless otherwise noted.