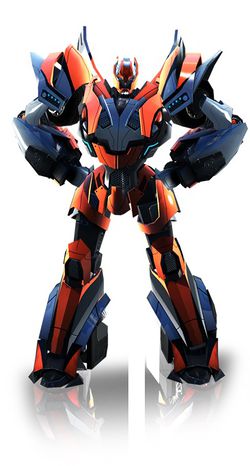 "Macro is one hotshot Autobot - I'm real glad we get along."

Macro is a member of the Arclight crew and an Autobot saboteur.

Macro was literally designed for tactical espionage action, sneaking into enemy territory and slicing up Decepticons. Skilled at hiding and utilizing all manner of weaponry, Macro will often jam enemy transmissions and set things up for his brothers in arms to smash in 'Con faces.

Macro lived on the planet of Velocitron, and was Deadheat's mechanic. Macro was among the Autobots who were on board the Arclight when it was shot down over Central City. He survived the crash and proceeded to take part in a series of battles against the Decepticons who had come to Earth aboard the Leviathan.

Retrieved from "https://transformers.fandom.com/wiki/Macro?oldid=460199"
Community content is available under CC-BY-SA unless otherwise noted.