Start a Wiki
The name or term Lockdown refers to more than one character or idea. For a list of other meanings, see Lockdown (disambiguation).

Lockdown is a Cybertronian mercenary from live-action film continuity family.

Lockdown is a bounty hunter who hasn't missed his target ever since he began his career in bounty hunting. Although his price is not cheap, his performance is the best in what he does. He was assigned by The Creators to capture Optimus Prime.

"You promised me with human intelligence, or is there such a thing?"

Lockdown and his group of mercenaries have no allegiance to the Autobots or the Decepticons. This ruthless hunter only works for the highest payers in the galaxy. As long as the price is right, he'll hunt down anyone.

He is well equipped for these hunts too. Not only the giant cannon mode, his head has multiple other configurations, such as a monocular long range scanner. He also has a tactical face plate that gives him readings on his "prey". His arms also have various configurations, battle hook, sword, cannon, claw and spark catcher. Last but not least, he has grenades and shoulder-mounted missile launchers. His vehicle mode is a 2013 Lamborghini Aventador.

At some point in the past, Lockdown "commandeered" the Knights Temenos from its crew of legendary knights.

Drift riding on Slug drove Lockdown in a corner and took the book for activated weapons. After many failed attempts, the Autobot took a giant cannon to shoot at the enemy (but first he suffered himself).

In Lockdown & Son, Lockdown secretly has a adopted human son named Tom, who he ever gets to spend time with. So when the Decepticons take a day off, Lockdown tries to have the most awesome day with his son.

―Lockdown as he brutally rips out Ratchet's spark.

While serving as the main antagonist, Lockdown works in secret with Cemetery Wind and their leader Harold Attinger to hunt down and kill the fugitive Autobots. In one such mission, he waits as the human task force engage Ratchet as he tries to flee. After the severely damaged medic explains to the humans why he was running, Lockdown opens fire on him, severely damaging him. He then breaks cover and approaches Ratchet, after he won't give in of Optimus Prime's location, he brutally rips the Autobot's spark from his chest.

After learning the location of the fugitive Optimus Prime at Cade Yeager's home in Texas, Lockdown watches over the Cemetery Wind mission from afar. Nearby a little league baseball game, he arrives at some storage tanks and transforms, using his hook to help him climb to the top of one of these tanks as the kids watch in amazement. After the initial attack was ineffective, Lockdown launches a barrage of missiles, destroying the Yeager's home. He then pursues the fleeing Optimus.

In the Dark of the Moon video game, he, along with Megatron, Soundwave and Crowbar. He appears in the levels Shipping Out and Deconstruction Site, as well as Breaking and Entering. Dark of the Moon (DS)

Lockdown was one of three transformers, collecting energon on the road with many obstacles. Energon Rally

Lockdown commanded Decepticon forces, which invaded the city. When the Autobots began to fight back, Lockdown on the flying platform tried to stop them, using his gun on his face. However, the Autobots were able to defeat him. Transformers: Battle Game

"LOCKDOWN is one of the most feared bounty hunters in the universe. He captures everything he tracks, collecting his prizes in his massive prison ship. Few of his targets have outmaneuvered him, and even fewer have escaped his jails. Now, the merciless DECEPTICON has set his sights on the AUTOBOTS!" -Official Hasbro bio

Lockdown is a "moviefied" version of his Animated counterpart. While he looks like the Animated figure, he is actually a different figure. His accessories can be swapped with Deluxe Ratchet.
This mold was later modified and used for Hunt for the Decepticons Axor.

Lockdown is back, and he's scarier than ever! This Lockdown changer still fights the Autobots every time he can, but he converts so fast they'll never be able to keep up. Press him to convert him from mighty robot mode to muscle car mode in just 1 step, then convert him back again when the battle calls for it! Autobots will never be able to handle your fast-changing Lockdown figure. -Hasbro Bio. 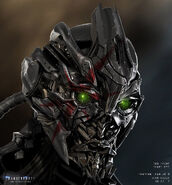 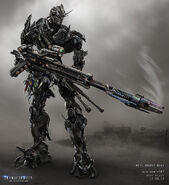