"Ho ho, we gonna screw this ship up!"
―Brains about to sabotage one of the carriers.

These big ships carry troops and fighter craft to the battle field. They are slow moving but there ominous presence in the sky can strike fear into the strongest of warriors. They are armed with missile pods above the "Bridge" and on each flank. They are very versatile, and they carry their own personal fighter escort. The ships move by long waving "wings" inside the exoskeleton near the front of the ship. They wave back and fourth, propelling the ship forward.

The fighter craft store in the sides of the these ships for refueling and resupplying. When they need to be deployed, the side panels open and the ships are carried out by Tractor beam. The pilots board by a gangway that stretches along the inside of the ship. There are ladders going to where the fighters dock.

"I can't hold them! The ships have us pinned...!"
―Optimus trying to fight off the ships while fighting Sentinel.

These fast, nimble little fighters are deadly. They carry multiple weapons, machine guns, (heavy and light) and missile launchers. The pilots are in-closed inside a solid metal cockpit for protection. These weapons appendages have different positions, when at full speed, the guns are locked in the forward position, when hovering, they're movable like turrets, and can rotate 180 Degrees. When changing positions, the whole body of the aircraft reconfigure/transforms.

When the small and medium versions of the fighters are not stored in the Carrier Ships, they will flip 180 Degrees, fly backwards, then cling onto a building, then reconfigure in a stable position. The Largest Version of these fighters is not capable of this, probably because of its thick size and no large latches under its guns. When an enemy passes, the fighter can quickly detach and destroy it.

There are at least three different types of Fighters, some are bigger, with larger engine turbines, fixed weapons mounts, and open cockpits. They include:

Main article: Small Decepticon Fighter(DOTM)
This smallest versions consist of two smaller mobile engines, with a closed cockpit in front, and a single, fixed, gun emplacement. They often fly low above water. These aircraft also have small wings. The Knights Temenos in Transformers 4 has these same fighters, but they are much larger, and they have open cockpits. They have better firepower, and faster speed.

This is similar to the small version, but with a larger body and mobile engine pods. It also has two more mobile weapons appendages, and several machine guns. These fighters can shoot down Human aircraft in seconds, thanks to its many machine guns. The fighter can also be reconfigured/transform for different attack modes. The Knights Temenos in Transformers 4 has these same fighters, but are bigger, and have upgraded engines, its been upgraded with missile launchers, a open cockpit, much faster machine guns, and it has a mini gun-pod attached to the back of it. Cade, Tessa and Shane use this gun pod to shoot down enemy fighters.
This is the model that is hijacked by Bumblebee in Transformers:Dark of the Moon.

This has a larger, wider and more rounded appearance than the other two and has six, smaller engines surrounded by small antenna-like spikes, but they are not movable like those of the smaller versions and has rotating fixed gun emplacements. Decepticons soldiers can hop on this fighter and cling on, usually on top of the guns. they can jump off the fighter when they want, thanks to the fighters slow speed.

While the Ark tries to escape Cybertron, five fighters attack the ship. They pursue it through the bombed-out planet until they start to leave the atmosphere. A fighter launches a missile that springs open and releases eight separate homing rockets that form a spiral. They hit the Ark, sending it tumbling through Space.

Years later on Earth, Megatron launches his invasion on Chicago where he deploys hundreds of the ships. The carrier ships launch salvos of missiles, wrecking buildings while the smaller fighters swarm all over the city, causing destruction and killing many people.

When the Autobots show up in Chicago after being assumed destroyed, Optimus Prime shoots one down and the Wreckers kill the pilot. Bumblebee manages to pilot the fighter and takes Sam to Trump Tower where Carly is being held. Laserbeak knocks it out of the sky by sending a mini UAV into one of its engines, but Sam manages to position Laserbeak's head in front of one of the fighter's guns, allowing Bumblebee to decapitate him with one shot.

While Sam, Carly, Epps and his team are in the Hudson Tower, one of the large fighters hovers outside the building and spots them. A Decepticon also on board the fighter jumps off and breaks through the window. Hardcore Eddie distracts the Decepticon and grenades him. The team shoots the glass, distracting the Defepticon. The team then jumps out the window and escapes him.

Later, after being accidentally left behind by Leadfoot, Wheelie and Brains find a crashed fighter and pilot it to a carrier ship. They only just manage to land in the ships hanger. Inside the ship, they wreck its internal systems by pulling out wires and circuits, causing the ship to drop all of the fighters docked inside of it to fall out around the Autobot prisoners, causing a large distraction for the Decepticons. The ship flips upside down, then crashes into the river running through Chicago and saving several Autobots from execution, thanks to the distraction.

When Sentinel Prime is overwhelmed by the attacking Autobots and NEST team, he calls in the remaining ships and Decepticons to attack. Optimus Prime tries to hold them off and destroys several of them, but he is eventually outnumbered and outgunned. Fortunately, the US Navy Tomahawk cruise missiles arrive, being guided by a laser designator held by one of the NEST team members, and destroy most of the remaining fighters.

When the space bridge is destroyed, all the remaining ships are sucked up into Cybertron which implodes, presumably destroying them. Dark of the Moon

This Legion sized figure of Starscream comes with an "Orbital Assault carrier". This "carrier" appears to be based on the smaller fighter craft in Dark of the moon.. This vehicle can turn into a weapons platform, a carrier Starscream can ride, and the separate fighter mode. The Starscream figure itself is a slight re-mould of the previous Legends mould. 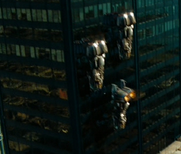 Retrieved from "https://transformers.fandom.com/wiki/List_of_Decepticon_Ships_(DOTM)?oldid=460187"
Community content is available under CC-BY-SA unless otherwise noted.