Kitbashing involves combining or modifying parts from one or more kits to make a custom model. The term has been extended to apply to models and toys such as Transformers that are not sold as kits. Kitbashing is sometimes called customizing.

The purpose of a kitbash is to obtain something that can't be bought, to improve something that can, or simply to engage in a refreshing exercise of creativity. Kitbashing is also frequently used in the toy industry by designers to develop "proof of concept" models to showcase an idea.

Kitbashing may be as simple as repainting a small detail. It may also be quite extensive, resulting in a product that in no way resembles any of its original sources. The derived parts are frequently augmented by scratchbuilt ones, and any part from any source, whether it is a Lego brick, a plastic tank tread, or a Barbie doll head, can be part of a kitbash.

As the Transformers brand expands, the customs market is becoming increasingly profitable for non-official companies. Reprolabels have been around for many years, starting off by selling replica G1 sticker sets. "Custom Transformers" will always provide a lot of fan-made projects for sale on eBay. Recently customs built from scratch of Cyclonus, Wheelie, and Quintessons have been available for sale from a number of retailers. The company Fans Project have designed upgrade kits for Classics Cliffjumper and Ultra Magnus.

This was frequently referred to as Reformatting.

Unicron was a frequent kitbasher, making Megatron into Galvatron, turning some Decepticon wreckage into Scourge, Cyclonus, and others, and even made some bystanders into Hook, Line, and Sinker. And of course, he kitbashed a clone into a champion. His Pit was a source of many kitbashings. Painful kitbashings.

Another frequent kitbasher is the Oracle, often using Optimus Primal as a conduit.

Additionally, Goldbug can be considered a kitbashed Bumblebee.

It could be argued that Sparkplug Witwickys' creation Autobot X is a kitbash. Autobot Spike

Skywarp was a victim of a severe case of kitbashing while he was still crippled from getting blown to bits. Hot Rod, Kup, and Blurr used Skywarp's pieces for an unexpected scheme to trick Galvatron. They repainted him to look like Starscream (fellow redeco Thundercracker was MIA), then added a Soundbox to the body, and faked a recording from Starscream to tick off Galvatron enough to blast Skywarp. What a waste. In their defense, it led Galvatron to scrap his plan to destroy Autobot City and return to the future (and one annoyed master). Target 2006

Were Skywarp aware of this, he probably wouldn't care. He'd have loved this prank. Safer than pushing Galvatron down the stairs.

He really need to see a dentist. 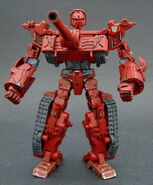 This is as close as you're ever going to get to seeing fan-art on this Wiki. It's Warpath, by "Jin Saotome". 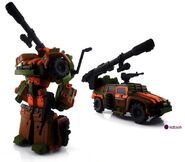 Roadbuster add-on kit with base model Crossovers Captain America. Its BFG time now!
Add a photo to this gallery

Retrieved from "https://transformers.fandom.com/wiki/Kitbashing?oldid=460156"
Community content is available under CC-BY-SA unless otherwise noted.