Kickback is an Insecticon. His sycophantic tendencies leave him open to being taken advantage of by more intelligent Decepticons who aren't afraid of using him as much of a pawn as he intends to use them.

After being imprisoned on the Alchemor and being set free on Earth, he's acquired a Formula One-style dragster mode. He resembles as a grasshopper.

Kickback worked with every criminal on Cybertron and was one of the prisoners aboard the Alchemor when it crashed, freeing him from stasis. After escaping, he tried to join up with Steeljaw's gang, only for the Decepticons to tie him up and use him as bait to lure the Autobots away from their scrapyard base. The Autobots freed him from his restraints, prompting the toadying Kickback to ask if the Autobots needed a new sidekick. When they refused his offer, Kickback used his side kick to escape from his captors, whereupon he immediately transformed and drives away out of sight.

In Metal Meltdown, Kickback had already encountered another group of Decepticons as they were located in a swamp with the back end section of the Alchemor as their base. He was sent by Scorponok and Glowstrike to scavenge some items that they listed for him to retrieve. He managed to gain some required junk and checked off some of the times (which he also had a My Little Pony toy in his list that he wanted to get) in a garbage area where Steeljaw has approached him. Kickback immediately backed away and recognized Steeljaw as the guy who used Kickback as bait to lure the Autobots. Steeljaw attempts to apologize to Kickback about that ordeal as he extended his hand to Kickback, but Kickback declines Steeljaw's apology. Steeljaw then attempts to recruit Kickback in a different team, though Kickback revealed that he is already in a team as they "appreciated" Kickback from the start. Kickback knocks Steeljaw in the air as he drives away. Unwittingly, Kickback led Steeljaw to the Alchemor with the other Decepticons. On his way into the ship, a number of various Decepticons passed him and caught up with two Chompazoids who were guarding the door leading to Scorponok and Glowstrike's room. When Kickback was called in, Saberhorn deliberately bumps Kickback on his left shoulder as he passed by him. Kickback presented his junk to his bosses, who were somewhat unimpressed at his competence. Kickback had asked if he gets some sort of reward, which Glowstrike merely shoots at Kickback to make him leave the room.

Kickback was among the Decepticons on the Alchemor when the Autobots activated a stasis bomb, freezing all of the escaped prisoners for shipment back to Cybertron in Decepticon Island (Part 2). 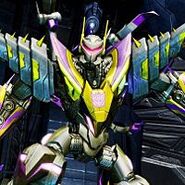 Kickback being tied down to a tree by Thunderhoof and Clampdown.

Add a photo to this gallery
Retrieved from "https://transformers.fandom.com/wiki/Kickback_(RID)?oldid=456140"
Community content is available under CC-BY-SA unless otherwise noted.