The Key to Vector Sigma is an ancient device that was connected to Vector Sigma and allows a Transformer or human to activate the ancient intelligence and use it for their own purposes.

The Key was within the possession of Optimus Prime when he led Team Prime on Earth. When Unicron was awakening within the planet's core, he decided to team up with Megatron to defeat this threat. Before departing through a GroundBridge to Earth's core, he gave Jack Darby the Key, calling it "the key to the GroundBridge power supply" and stating that Jack had shown enough maturity to be entrusted with the device (the Key transformed into a smaller version of itself as it passed from one to the other).  Ratchet later noticed the Key and asked Jack where he got it from; upon being told Optimus had given him the item Ratchet explained that there was no "key to the GroundBridge" and that the artifact was the Key to Vector Sigma, describing it as "one of Cybertron's most important relics." When Jack asked why Prime would entrust him with it, Ratchet answered that it was because Optimus did not expect to survive his confrontation with Unicron.

While Optimus did survive the battle with Unicron, his use of the Matrix of Leadership robbed him of his memories as a Prime, reverting him to his old persona as Orion Pax. Ratchet surmised that Optimus had left the Key with Jack as a failsafe in case this scenario played out, leaving Jack as both something of an honorary Prime, and the only one capable of restoring his memories using the Key. Team Prime resolved to commandeer the Decepticons' space bridge in order to transport Jack to Cybertron to download the knowledge of the Primes from Vector Sigma. Once the bridge had been seized, Jack and Arcee were bridged to Cybertron. They began using the key to try to track down Vector Sigma, and it began leading them towards Kaon.

Within the Decepticon capital, the key triggered the rising of an ancient portal, which Jack entered while Arcee was otherwise occupied with an Insecticon. He followed the key's signal down to the chamber containing Vector Sigma itself and used it to activate the ancient computer. Despite an attack by scraplets, the Key received the contents of the Matrix of Leadership and Jack took it back with him to Earth, where he transferred his contents back into Optimus Prime's Matrix, restoring the Autobot leader's memory. The Key was then returned to Prime's possession. 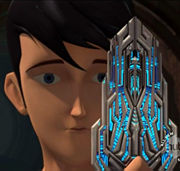 Add a photo to this gallery
Retrieved from "https://transformers.fandom.com/wiki/Key_to_Vector_Sigma?oldid=448361"
Community content is available under CC-BY-SA unless otherwise noted.