KSI Sentry is a Decepticon from the Age of Extinction portion of the live-action film series continuity family.

KSI Sentry is a model of Transformer produced by KSI.

KSI Sentries was one of the models prototypes created by KSI. In Hong Kong, KSI Sentries became under the control of Galvatron,He is seen in numerous scenes, including the fact that he is sliced in half by Drift, and how his face is shot off by Cade, Bumblebee, and Optimus. Transformers: Age of Extinction 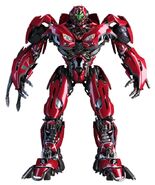 A KSI Sentry Prototype getting Sliced in half

Concept Art
Add a photo to this gallery
Retrieved from "https://transformers.fandom.com/wiki/KSI_Sentry?oldid=427712"
Community content is available under CC-BY-SA unless otherwise noted.