The Jackhammer was Wheeljack's personal spaceship that was used to travel through space and get to Earth.

It is equipped with energon laser cannons and guided missiles for defense and offense in battle.

When Cybertron went dark, Wheeljack began traveling the stars alone in the Jackhammer.

Eventually, Wheeljack reached Earth's Solar System and was hailed by the Autobots stationed there, including Bulkhead. As he was coming in to land at the coordinates provided by Optimus Prime, the Jackhammer was attacked and shot down by Vehicons somewhere over what would appear to be Egypt. After Wheeljack defeated his Doppelgänger, the Jackhammer was repaired, and though the Autobots welcomed Wheeljack to stay, he revealed that he intended to return to space. He invited Bulkhead along, but Bulkhead was too attached to his friends on Earth to leave. Bulkhead was sure he'd return someday.

While searching the galaxy, Wheeljack found Seaspray, only for the other Wrecker's ship to be destroyed. He chased the culprit, Dreadwing, to Earth. After a firefight, Wheeljack flew the Jackhammer to the Autobot base, where it was concealed in a cave atop the mountain. Wheeljack and Bulkhead later used it when they went to try and hunt down Dreadwing.

During the third Iacon relic hunt, Wheeljack picked up Ratchet, and the two Autobots set out in the Jackhammer to head for the coordinates. En route there, the two encountered Soundwave, who proceeded to attack the ship before dispatching Laserbeak to deal with the Autobots. The midair fight that ensued left both the Jackhammer and Laserbeak damaged. After planting a virus and a decoy bomb in Laserbeak, Ratchet returned to base while Wheeljack opted to stay with and repair his ship. Later, Wheeljack and Miko used the Jackhammer on their quest for vengeance for Bulkhead.

After picking up a huge energy surge, Wheeljack flew the ship back to Jasper and used its armaments on the Decepticons attacking the Autobot base. It was shot down by Starscream shortly before the Decepticons destroyed the base. Wheeljack pulled some ammo from the wreck of the ship when he escaped Darkmount. 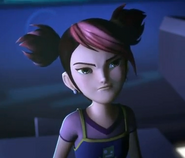 Add a photo to this gallery
Retrieved from "https://transformers.fandom.com/wiki/Jackhammer_TFP?oldid=457464"
Community content is available under CC-BY-SA unless otherwise noted.