Hot Shot is a young and impetuous Autobot that was recruited by Optimus Prime to join the Rescue Bots.

Somehow, Hot Shot became corrupted by Dark Energon. Entering into an uncontrollable frenzy, he drove around atop a dam which the Autobots had rigged for demolition so that the Decepticons wouldn't be able to make use of it. A team of Autobots spotted him and went to help, but he sped around, attacking them. After they defeated him, he calmed down, fighting off the effects of the Dark Energon and returned to himself.

Hot Shot was on the Ark. When it reached Quintessa he, Kup and Optimus went to the surface. As Optimus spoke with The Curator, he and Kup got a tour of the city. During peace talks he was under Kup's command to defend the Energon reserves against the Decepticons. When the Decepticons came a massive fight broke out, which ignited the Energon and ravaged most of the Quintesson city. Hot Shot carried three cubes and five barrels of liquid Energon to the Ark before it took off. 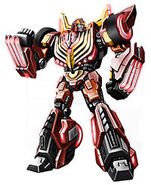 I look better in that appearance! I look like Rodimus Prime, I'm a body thief... 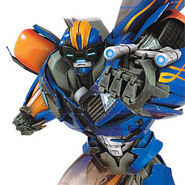 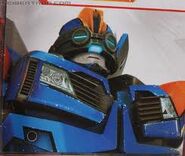 Retrieved from "https://transformers.fandom.com/wiki/Hot_Shot_TFP?oldid=479453"
Community content is available under CC-BY-SA unless otherwise noted.