Start a Wiki
Heavy Soldiers are heavily armed and armored combat soldiers used by the Autobot and the Decepticon armies.

Standing taller than an average Transformer, they roam the battlefield, carrying their ion displacers, pouring heavy firepower that devastates any opponent foolish enough to fight them head-on.

Both sides used them during the Great War, including the Neutrals in self-defense. The ones in FOC use X18 Scrapmakers and are all Autobots. 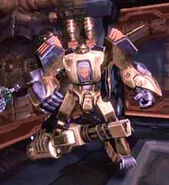 Autobot Heavy Soldier
Add a photo to this gallery
Retrieved from "https://transformers.fandom.com/wiki/Heavy_Soldier?oldid=448068"
Community content is available under CC-BY-SA unless otherwise noted.