"One guided missile to make all your dreams come true!"
―Heatseeker before firing two missiles in Disordered Personalities.

Heatseeker is a Decepticon stunticon who can fire Missiles at will who forms Menasor with Motormaster, Dragstrip, Wildbreak and Slashmark.

Heatseeker first appeared in King of the Hill (Part 1). Heatseeker was assigned to claim Grand Valley as Stunticon territory by Motormaster. His tangling with some cops alerted Team Bee, who deployed Strongarm and Sideswipe in response to the situation, but after toying with them for a while, Heatseeker easily lost them by collapsing a tunnel on them. Taking up a position at the top of a rocky outcropping, he began firing guided missiles at them. When the Autobots managed to get the missiles to slam into each other and hid, Heatseeker held his position and waited for them to come out again. When Bumblebee, Drift, and Grimlock arrived as backup, they were unaware that Heatseeker had already spotted them, and the Stunticon fired off five more missiles, which threatened to detonate a nuclear waste disposal site close by.

In King of the Hill (Part 2), Heatseeker's missile attack was thwarted when Drift, recognizing the type of missile used, quickly instructed Team Bee how to use their comms to scramble and disable the missiles' detonators. Heatseeker retreated, chased by Bumblebee, Drift, and (eventually) Grimlock.

He laid a trap in the form of a huge number of oil-filled barrels scattered around a disused gas station, using his missiles to detonate them. Unable to use their now-malfunctioning comms to disable the missiles, the Autobots were kept running for cover. Thanks to the intervention of a mysterious Mini-Con, Heatseeker was once again forced to run, returning to the edge of the waste disposal site.

Encountering a lone human, Heatseeker intended to use him for leverage, but he didn't have the chance before the Autobots arrived and surrounded him. Heatseeker prepared another missile barrage, but was quickly dog-piled. One massive explosion later, Heatseeker opted to cut and run while the Autobots were unconscious. As he sped past the gas station, he noticed a Cybertronian tracking device in a crater, and quickly decided this would be the perfect way to lie to Motormaster about just why he had left his post, presenting it as a gift. Motormaster was unimpressed, but Heatseeker was able to talk him around.

In Disordered Personalities, Heatseeker joined his fellow Stunticons in the Crown City Grand Prix, believing that the "Ruler of the Roads" title awarded to its winner was literal. Disdainful of the "squishies" he was competing against, he revealed himself to Grimlock (temporarily swapped into Drift's body), and then proceeded to duel with the Autobot, attempting to push him off a cliff before spinning him out. As the race approached its finish, he launched his missiles at Casey in an attempt to give Drag Strip and Wildbreak a clear run for the win, only for the Autobots to dupe the missiles into doubling back and nailing the three Stunticons themselves.

In The Golden Knight, while recovering from the setback, Heatseeker joined his fellow Stunticons in running the humans out of Star Visitor Estates, followed by his Crash Combining with Slashmark to form Heatmark to celebrate their victory. They were then joined by Motormaster, who was less than impressed at the pace of their conquering of Earth's roads.

In Railroad Rage, along with the other Stunticons, Heatseeker went on a joyride across the roads to assert their dominance over Earth, but an impressively fast train caught the attention and ire of Motormaster, who demanded the engine of the offending machine. Heatseeker and the other Stunticons met the Bee Team on the way to their objective but met their defeat during a brawl on top of the speeding vehicle. Motormaster took their report of failure badly and loomed ominously over his underlings, stating that he had various ideas of how they could make up for the loss.

In Combine and Conquer, Heatseeker and the other Stunticons were on the receiving end of an angry monologue from Motormaster on their team's failure to defeat the Autobots. After they ran a tanker truck off the road to bait the Autobots to their location, Heatseeker joined the Stunticons in combining into Menasor, taking his spot as the combiner's left arm. Knocking the Autobots off a cliff, Menasor went to attack a human military base, intending to turn its meteor deflection system on the Autobots. However, his plan was thwarted when the Autobots managed to form their own combiner, turning the meteor deflection dish on him instead and sending him flying into the distance.

In Moon Breaker, after Wildbreak and Slashmark reported to Motormaster, he decided the Stunticons should follow the Autobots up there to the moon. After a brief space battle, the Stunticons’ tech detector led them to the same cache the Autobots were after, on the surface of the moon. Once there, Motormaster ordered Heatseeker and the other Stunticons to finish off the Autobots while he investigated the cache, but they were too curious to find out what was in it and followed him instead. They promptly combined into Menasor, broke into the cache, and claimed the plasma thermal accelerator module therein. With the help of this upgrade, Menasor knocked the Autobots back and attempted to destroy their ship, but they combined into Ultra Bee and destroyed the plasma module, allowing them to defeat him. Heatseeker and his fellow Stunticons were then put into stasis pods and taken by Optimus Prime back to Cybertron. 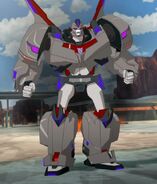