"I'm his manager, you talk to me."
―Headlock

Headlock is Decepticon and he is also Groundpounder's coach.

Headlock managed the goliath Groundpounder in the gladiatorial pits of Kaon who made him a reigning champion, until they were both accused of cheating and kicked out of the gladiator circuit. Enraged by this accusation, Groundpounder went on a destructive rampage, requiring the deployment of the Elite Guard. Eventually Groundpounder and Headlock were caught and both of them were placed in stasis pods aboard the prison ship Alchemor, but were freed when the ship crashed on Earth.

The two Decepticons hid out at a construction site outside of Crown City, while Groundpounder began a new training regimen at Headlock's request. Upon seeing an advertisement for the Rumbledome, Groundpounder decided he needed to prove he could take on the human-built monster trucks. Forcing his way into the arena, Groundpounder challenged the current champ to a match, and Farnum promptly agreed. Though Crusher Casey and her Mechanosaurus put up a good fight, Groundpounder eventually put her rig out of commission with the help of Headlock's sabotage during the fight. The manager believed Headlock and Groundpounder to be human-controlled robots as part of an act and offered them a permanent spot in the show.

For their next show, however, Groundpounder discovered his opponent was a real Dinobot and an Autobot named Grimlock. Headlock stepped in when it looked like Grimlock was winning, zapping the Dinobot with his welding finger to keep him distracted as Groundpounder fought Grimlock. Fixit, who had been a fan of the pair's matches and didn't believe they had cheated—up until he saw Headlock cheating in the match, stepped in and eventually brought Headlock down in a surprising display of combat skills. As Grimlock finally knocked Groundpounder down with his favorite cannonball move, the recovered Headlock made a break for an escape, only to be stopped immediately by Strongarm as she placed him in cuffs. 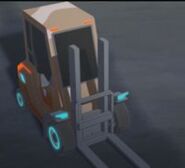 Add a photo to this gallery
Retrieved from "https://transformers.fandom.com/wiki/Headlock_(RID)?oldid=456137"
Community content is available under CC-BY-SA unless otherwise noted.