Pounder of Ground
King of The Ring
Pulverizer of The Pits

"Time to bring the heat!"

―Groundpounder's catchphrase in The Champ.

Groundpounder (aka the "Beast from Kaon", the "Pulverizer of the Pits" and "Pounder of Ground") is a massive gorilla like Decepticon gladiator who fought in Kaon's utterly brutal matches. Under the tutelage of his coach Headlock, Groundpounder's signature "Fiery Fists of Furnax" and arsenal of throws made him a legend to fighting fans. Groundpounder is very imaginative with his moves, but he doesn't really need to be, as his sheer power makes him a match even for a Dinobot. Violence is pretty much all he knows, and his sole goal is to prove he's the biggest and baddest beast-bot there is. When Groundpounder and Headlock were accused of cheating, Groundpounder went on a rampage, which resulted in half of the Elite Guard to bring him down and ultimately ended with him and Headlock being locked away on the prison ship called the Alchemor.

Free once again, Earth is just the place to make a comeback... and he has no problem with letting his coach Headlock play dirty while he roughs up the opposition.

Groundpounder was one of Cybertron's greatest gladiators in Kaon until he and his coach named Headlock were accused of cheating and were soon kicked out of the arena. Enraged by this accusation, Groundpounder went on a destructive rampage across Cybertron and it took half the Elite Guard to take him down. Eventually, Groundpounder and his couch were both arrested and placed on board the Alchemor.

When the prison ship crashed on Earth, Groundpounder and Headlock were free. They hid out at a construction site outside of Crown City where they took on Earth based construction vehicle forms, an Excavator and a Forklift respectively. Groundpounder told his coach that he was getting sick of laying low from the squishies and his luck soon turned when he saw an advertisement for the Rumbledome. Groundpounder decided to take on human built monster trucks. Groundpounder forced his way into the arena where he soon challenged the current champ to a match, which the Rumbledome manager promptly agreed. Though Crasher Casey and her Mechanosaurus put up a good fight, Groundpounder eventually put her rig out of commission, with the help of Headlock's sabotage in the process. The manager believed Groundpounder and Headlock to be human-controlled robots as part of an act and then offered them both a permanent spot in the show.

For their next show, however, Groundpounder discovered his opponent was a real Dinobot and Autobot named Grimlock. Grimlock was thrown around by Groundpounder during their fight but soon started to fight him back. The battle became increasingly destructive and it also began damaging the stadium itself. During the fight, Headlock came in to assist Groundpounder and Grimlock was left facing both of them. However, Headlock was taken out courtesy of Fixit, who had also been coaching Grimlock to read Groundpounder's moves. Grimlock used Fixit's moves on Groundpounder and soon overpower the giant robot ape. Groundpounder left himself open for Grimlock's cannonball attack, and was swiftly incapacitated.

After Steeljaw broke into the scrapyard in Misdirection, he deactivated Groundpounder's stasis pod, alongside several others, as part of a bid to bolster Glowstrike's forces. When Thunderhoof brought up Steeljaw's past failures at leadership, Steeljaw informed the Decepticons of his alliance with Glowstrike, and gave them coordinates to follow while he remained at the scrapyard. The escapees later reconvened at Steeljaw's coordinates, where they was inspected by Glowstrike, who seemed pleased by the new cadre of "elite warriors".

In Portals, Groundpounder gathered with Steeljaw's other remaining followers on the roof of the crashed back half of the Alchemor, where Steeljaw updated them on his plans to overthrow Glowstike, until she and Saberhorn arrived to talk with Steeljaw alone.

In Decepticon Island (Part 1), along with the other Decepticons, Groundpounder was present after Steeljaw staged his coup and took control of the Decepticons.

In Decepticon Island (Part 2), when the Bee Team split up to try and incapacitate the vessel, Groundpounder and Thunderhoof faced off against Grimlock, Strongarm, and Sideswipe. Eager for a rematch, Groundpounder got the upper hand, gleefully pounding his Dinobot rival senseless while Thunderhoof handled the other two. He and Thunderhoof were taken out by a high-frequency signal that Sideswipe created as the Autobot tried to free the Mini-Cons held hostage aboard the ship. Both Decepticons were summarily re-frozen by a stasis bomb that Bumblebee and Optimus Prime detonated aboard the ship.

Groundpounder's appearance is that of a mechanical silverback gorilla (King Kong by others), his fist on his right is larger than the left. He has a Decepticon symbol on his chest. He also has bulky shoulders.

Groundpounder's personality is like those wrestlers who think they are the top of the world, he is vain about himself and keeps proclaiming that he beats up Dinobots (since they are among the strongest of Cybertronians). He is very aggressive and would not hesitate to try his moves on anyone that he faces or gets in his way. He also seems to enjoy crowds, even Humans, cheering him on.

Groundpounder is a strong Decepticon, easily throwing Grimlock and nearly pinning him down until he equals him in terms of strength, he is an expert in wrestling moves. 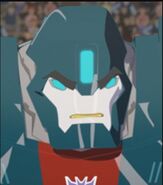 Add a photo to this gallery
Retrieved from "https://transformers.fandom.com/wiki/Groundpounder_(RID)?oldid=456588"
Community content is available under CC-BY-SA unless otherwise noted.