Grimlock is the leader of the ancient Dinobots. He is a fierce warrior.

Grimlock is Leader of the Dinobots, he and the rest of his fellow warriors once navigated the universe in their ship, the Knights Temenos. However, when it was hijacked by the bounty hunter Lockdown they became prisoners in their own ship.

Centuries later, when Optimus Prime needs help in Hong Kong he freed the Dinobots. To gain their trust, Prime challenged Grimlock to a match and won, taking advantage of the size of the enemy. Optimus, now saddled on Grimlock, rushes into battle with the rest of the Dinobots along with Drift and Crosshairs. Together they destroyed many enemies, together with the Autobots they then defended the bridge so the Decepticons couldn't reach the Seed.

When Lockdown returned, Grimlock suffered from the power of the magnet on the bottom of Lockdown's ship as he and the other transformers couldn't escape its magnetic pull. After the battle was over, Grimlock was released along with the other Dinobots. Age of Extinction

In How to Ride Your Dinobot: Chapter 2, Optimus Prime was trying to ride Grimlock, however, the Dinobot was being very stubborn and wouldn't walk. Prime tried kicking him, but ended up getting thrown off and landed in a barn. After recovering, he was ready to get Grimlock to start walking. He angrily motioned him to start running, and finally made Grimlock happy by gentily motioning him. Grimlock was happy, and was given a piggyback ride at Optimus Prime's expense. How to Ride

When Bumblebee and Drift were ambushed heavy warriors of Lockdown, Grimlock came to the help of the Autobots. Dinobot forced the enemy to retreat. Later cleared a passage to the mercenary and with Drift distracted by his troops, while Optimus and Bumblebee travelled to Lockdown. When the enemies were defeated, a dinobot ran away. Rise of the Dark Spark

Optimus Prime riding Grimlock broke through the strengthening of the Decepticons and captured enemy base.

Grimlock was among the Autobots, who helped clear the Texas and Detroit from mercenaries of Lockdown.

"Stomp n' Chomp Grimlock is a toy with some Sound Effects. Yes, it can transform. It comes with a sword, which also makes part of Grimlock's tail. In T-Rex mode, Grimlock has a cannon on top of him.

It is a Voyager Class toy of Grimlock.It can transform from Tyrannosaurus Rex mode to Robot mode.

"Grimlock is the ultimate wildcard. The Dinobot leader has the power to decide the fate of Earth almost singlehandedly. His ferocious strength makes him a devastating force in battle. If that strength can be focused and harnessed for good, it could be enough to turn the tide. If not, it might be what seals Earth's doom. Gear up for massive Transformers action with this awesome 2-in-1 Grimlock figure! This powerful leader of the Dinobots is a terrible powerhouse in robot mode, wielding his battle mace with a double spear point. But he's just as scary in chomping, stomping T-Rex mode! Convert him back and forth as the battle rages on! Can any enemy stand against him? There's only one way to find out!" 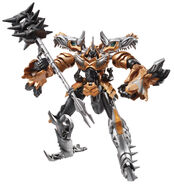 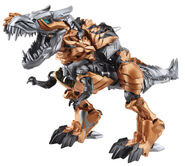 It can transform from T-Rex form to Robot form. Notably, it also has chrome parts, not commonly seen in the toyline since Generation I.

"He has battled countless enemies across the universe, never concerning himself with trophies, only victories. He has proven difficult to capture and nearly impossible to defeat. When an enemy does manage to get the best of him, it's never for long. Un-caged and unleashed, Grimlock is concerned with only one thing: vengeance against those who would try to control him. Convert, arm and attack with all the Transformers action you can handle! This Grimlock figure is a high-powered fighter whether he's in robot mode or dino mode. With his Dragontooth Mace in his fist, he's a spiky danger to any enemy in robot mode. When he converts to T-rex mode, he'll stomp any enemy flat! Keep converting him back and forth so he can handle whatever his foes dish out!" 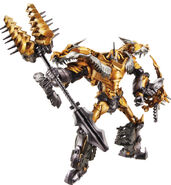 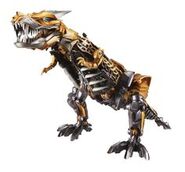 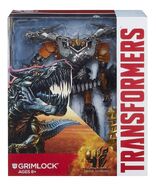 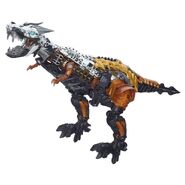 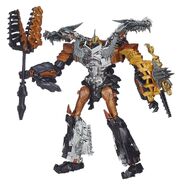