Teletraan I: The Transformers Wiki
Register
Don't have an account?
Sign In
in: Unreleased toys, Character stubs, Artists,
and 3 more

View source
This article is about the Autobot crane. For the ex-Constructicon crane who looks exactly like him sometimes, see Hauler.

This article is about the Generation 1 Autobot. For the Kre-O Autobot, see Grapple (Kre-O).

Grapple is technically an architect, but in his Spark he is an artist. On Cybertron, before the war, his buildings were considered great works of art, but now his constructions are limited by the realities and needs of the war effort. It is a situation he often finds stifling. Grapple takes great pride in any work he constructs, and is prone to severe bouts of depression should his "masterworks" be destroyed in the course of combat. Grapple can usually be found hanging out with his close friend Hoist who does his best to cheer Grapple up when his artistic temperament has him down.

"Someday I want to build something that doesn't get trashed!"
―Grapple laments his creations' constant destruction[["Auto Berserk"| [src]]] 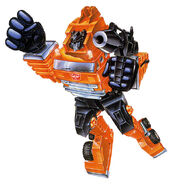 Grapple designed a Solar Tower to collect solar energy for the Autobots--even built a little model of it. When Optimus Prime wouldn't let him build it, Grapple ran off to sulk and encountered the Constructicons, and naturally told them all about his awesome tower idea that got nixed because Prime didn't want the Decepticons getting their hands on it. Brilliant.

They agreed to help Grapple and his buddy Hoist out, but then Megatron found out and decided to turn it into his latest evil plan. The Solar Tower was completed, but Devastator trapped Grapple and Hoist inside it, and the Autobots had to show up to save their skidplates. The Master Builders

Grapple was also one of several Autobots captured by Lord Chumley's wildly-improbable traps; Grapple fell victim to a series of girders that magically fell into a cage configuration. Taken to Chumley's goofy-ass castle, he was used as bait to draw in Optimus Prime, "forced" to hold up a giant boulder - which did not seem to be actually supported by anything and therefore Grapple could have just dropped it or thrown it at one of the other devices keeping the Autobots prisoner.

A robot resembling Grapple also appears fighting alongside Perceptor in the Battle of Autobot City in Transformers: The Movie

Prior to the Ark leaving Cybertron, Grapple (along with Smokescreen, Tracks, Hoist and Skids) had his memories recorded onto crystals in case Optimus Prime required more warriors during the Ark's mission. Four million years following the Ark's crash on Earth, Grapple and the others were revived in new bodies on Earth. While the other newly revived Autobots were sent out to learn more about their new home planet, Grapple was sidelined. Optimus Prime had a very special building project for Grapple. Rock and Roll-Out!

So Grapple built Omega Supreme. On his own. Command Performances!

When Optimus Prime, Ratchet and Prowl disappeared due to time-jumping Decepticons, Grapple found himself in the position of Autobot medic, repairing a damaged Hound. Led into battle with Galvatron and his goons by the new leadership triumvirate of Ironhide, Smokescreen and Jetfire, Grapple and his friends were sorely outmatched against the future Decepticons. Grapple was even part of a half-dozen or so Autobots who dogpiled on Scourge and barely managed to slow him down. In dire straits, the Autobots were actually forced to go to Megatron and forge an alliance against Galvatron. Megatron's strategy managed to capture one of the time travellers, Scourge, but not before the fiendish tracker hurled a razor bladed dart straight through Grapple's chest, putting him out of action for the remainder of the conflict. Once Ratchet returned, he managed to piece Grapple back together soon enough. Target 2006

Grapple remained with the Ark's crew for quite some time, and was seen on the moon during the grudge match between Blaster and Grimlock. When the Decepticons attacked, Grapple engaged Wildrider in some gunplay. They appeared to exchange hits, but his final fate is unknown. Totaled!

In 2008, Grapple was operating out of one of the Autobot bases on Cybertron when Scourge and Cyclonus led the Decepticons into an all-out war on the base. (The base was a big honkin' mushroom in the middle of an empty field. One can only hope Grapple didn't design it himself.) Anyway, he did pretty well in battle, actually standing up to two Decepticons at once, including the commando Blitzwing. The Legacy of Unicron!

Note: Optimus Prime says he copied Grapple's memories in case he needed another warrior while away. Does that mean there's still the original Grapple out there somewhere?

While lamenting the fact that he couldn't build beautiful buildings like he did back on Cybertron because the Decepticons would destroy them, Grapple spotted a grasshopper and a beetle. He wished life were as simple for him as it was for those insects, who promptly violated his brain. Under Bombshell's control, Grapple attacked the resident Autobot hippie. Later, at their base, the Decepticons made Grapple their bitch. After the Autobots removed his cerebro-shell, Grapple sucker-punched Megatron and they all celebrated. Hurray! Insecticon Attack

Note: Throughout almost the entire story, Grapple is drawn with Hook's character model, only appearing with Grapple's own head in close-ups.

After the Great Shutdown ended, Grapple was among a group of Autobots chosen to serve as a High Council, ruling jointly with the Decepticon Shockwave over the newly unified Cybertron. However, the Decepticon easily manipulated the council into giving him more and more power, until they were functionally impotent. Grapple and his fellow council members were among the last Autobots to truly recognize Shockwave's deceits, but did eventually join their fellow soldiers in bringing down the Decepticon's control of Cybertron. Revelation Afterwards, Grapple decided to accompany Prowl and the Ark's crew back to Earth, where he could put his skills to work on the construction of Autobot City. The Route of All Evil

While Inferno was running an emergency rescue operation in Kaon during the first major outbreak of Decepticon violence, Grapple was at his side to presumably offer engineering advice on safely evacuating trapped civilians. Their efforts became moot when a hovering pleasure cruiser was shot down and landed right on top of them. Megatron Origin issue 4

Grapple transforms into an orange crane based upon the same truck design that Inferno uses, the Mitsubishi Fuso. Each of his forearms contains a spring-loaded missile launcher, so he can fire his own fists or silver missiles (though the mechanism was severely neutered in the original US releases). He is also armed with a small black rifle.

Grapple was reissued by Hasbro in 2004 as part of the Commemorative Series. The spring-loaded firing mechanisms in his arms were completely removed due to safety reasons. Additionally, the hook on his crane as well as the hydraulics in the crane arm were changed to plastic painted silver, rather than using the more brittle (but authentic to the original release) vacuum-metalized plastic. He also gained a new Autobot sigil tampograph on his chest/cab, and his eyes were changed from yellow to blue.

One of many Generation One characters slated to appear in Attacktix, Grapple would have been a "rammer"-type piece, with a spring-loaded boom-crane attack. A presumed wave-3 Booster, this piece was ultimately never released.