Glowstrike was a prisoner aboard the Alchemor, but she was freed when the ship crashed on Earth. She, Saberhorn, and Scorponok staged a revolt against their Mini-Con prison wardens, enslaving them and forcing to rebuild their half of the ship. Glowstrike planned to rebuild the ship to get them off world; while the Mini-Cons labored to rebuild the ship she and her new underlings started gathering materials. At some point, she sent some Decepticons out on collecting the materials to get them off the planet, mostly Kickback. She was utterly disappointed with the performances of Saberhorn and Kickback (even though Kickback did accomplish his task of bringing back the required supplies). As Glowstrike told Kickback it will serve, Kickback asked for a reward only for Glowstrike to shoot at the latter to make him leave the room. Glowstrike points the minions they have to Scorponok and she desired to have a Decepticon that they can rely on, which Steeljaw came in their room to introduce himself.

In Misdirection, after Steeljaw sprang a slew of Alchemor escapees from Denny's scrapyard, a pleased Glowstrike inspected the new recruits. She was impressed with (almost) all of them as she dubbed them as more than "adequate" despite Scorponok turning to be a "traitor" to their cause.

In Portals, returning from a mission with Saberhorn, Glowstrike congratulated Steeljaw on his recent victories. As a reward, Glowstrike and Saberhorn offered him a position in the growing command hierarchy. To prove his loyalty, they had him attack a Sharkticon, who had apparently been planning against them. Convinced that Steeljaw would serve them well, Glowstrike and Saberhorn instructed him to find a way to access the Decepticon hunters located in the ship's locked armory since they revealed that they were unable to open the armory themselves.

In Decepticon Island (Part 1), Glowstrike and Saberhorn were summoned by Steeljaw, who managed to access the Decepticon Hunters. Glowstrike and Saberhorn were both very impressed by their ally's work but Steeljaw turned on them with the Decepticon Hunters he obtained. Glowstrike was present when the Autobots invaded the ship as she walked with Saberhorn with Steeljaw behind them. The pair stepped to the side as they bowed to present Steeljaw, who had betrayed them by taking over their positions as the leader of the island.

In Decepticon Island (Part 2), they were paraded in front of the Autobots when Bumblebee's team led a raid on the crashed ship, and although Glowstrike tried to fight back to regain control from Steeljaw, she had to stand down. When she found that Bumblebee discarded his Decepticon Hunter, she attempted to use it against Steeljaw. However, Steeljaw effortlessly disarmed her by shooting her, and Saberhorn, with his two Decepticon Hunters. Glowstrike and Saberhorn were frozen after the Autobots detonated a stasis bomb in the ship's ventilation system, along with the other Decepticons.

Glowstrike appears to be a very stern and aloof leader. She has high standards as she entrusts her fellow Decepticons with work she assigns to them or even when approving more warriors to the cause. She seems to be displeased in the kinds of Decepticons that were left stranded on Earth as it is shown in Metal Meltdown where she had hoped to find a Decepticon to rely which is where Steeljaw showed up before her and Scorponok. 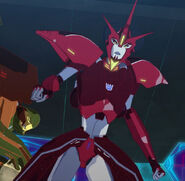 Add a photo to this gallery
Retrieved from "https://transformers.fandom.com/wiki/Glowstrike?oldid=480787"
Community content is available under CC-BY-SA unless otherwise noted.