Gale is the fifteenth episode of Armada. It first aired in the United States on December 20, 2002 on Cartoon Network.

During a search for the latest Mini-Con, Scavenger and Hot Shot continue their rivalry on an unfinished highway. But who is the mysterious newcomer?

Within The Big City, a mysterious rider on a toyetic purple motorcycle lands from space. In the Autobot base, Hot Shot is practicing swinging his Star Saber. Billy suspects that since the Star Saber is the most powerful weapon in the universe, Hot Shot, by extension, is the most powerful Transformer. Although Carlos feels that's not exactly how things work. Soon Red Alert comes to tell Hot Shot another Mini-Con has been detected and the males pledge to be Hot Shot's cheerleaders. In the Autobots' main control room, Alexis determines the Mini-Con panel's location in a freeway tunnel in grid sector 29365. The Autobots rush into action and the kids come along too, for cheerleading purposes (with Red Alert's approval). Already at the scene, Demolishor and Cyclonus guard the outside of the tunnel and see the oncoming Autobots. Inside, Starscream and Megatron oversee Scavenger's digging, who resents having to do this labor. To delay the Autobots, Cyclonus transforms and uses his alt mode to force a civilian truck into lodging itself in the highway horizontally, retarding the flow of traffic. Hot Shot uses Jolt to circumvent this traffic obstacle, while Optimus drops off Billy and Fred, speeding away before noticing the mysterious purple bike drive by to pick up one of the kids. Cyclonus is chased by Hot Shot (carrying Rad and Carlos), who in turn is being chased down by Scavenger. Hot Shot drops off the kids, transforms, and summons the Star Saber to again engage in Scavenger in direct combat. Cyclonus attempts to take advantage of the fight, by shooting Hot Shot from behind. As soon as Cyclonus misses, the cries of Billy, kidnapped by the motorcyclist, distract everybody. The motorcyclist stops and lets Billy off so that Billy can hug Rad. (Fred meanwhile, remains alone and unloved.) Then the purple bike returns to the duel between Scavenger and Hot Shot, and with an impressive jump, the bike takes Cyclonus out of the sky. Just then, Alexis, with the Street Action Team, arrives near the duel scene and meets up with Rad, Billy, and Carlos, who she yells at for abandoning her. Scavenger and Hot Shot finally begin their battle, and Scavenger grabs Hot Shot out of a slow-motion leap and slams the Autobot into the ground. Seeing the unfinished section of the highway, Hot Shot releases the Star Saber Mini-Cons and drives away, and Scavenger chases after him. The motorcyclist continues to follow the fight. Within the tunnel, the Autobots and Decepticons battle, while Hot Shot and Scavenger literally drive right through, and Cyclonus gives up his struggle with Smokescreen to follow the duel. When Scavenger arrives on the incomplete section of the highway, Hot Shot leaps from the sky and lands behind Scavenger. With much vigor, Hot Shot slices the entire section of the road away, causing it to fall. Scavenger just manages to make it back onto the stable section of the road by hanging onto Cyclonus's flying alt mode. Defeated, Scavenger laughs and berates Hot Shot, saying that he will prove Hot Shot's incompetence another day. At that moment, the motorcyclist also laughs at Hot Shot. Inside the tunnel, the defeated Decepticons teleport away again. Hot Shot, the kids, and the motorcyclist arrive in the tunnel too. Optimus thanks the stranger, and the bike transforms and introduces himself as Sideways. Smokescreen then announces that he's found the Mini-Con panel, which activates and reveals itself to be Spiral. Back at the Autobot base, Billy is riding around with Sideways some more, and Fred accepts an offer (translated by Carlos) to ride on Spiral. Hot Shot and Red Alert agree that Sideways might not be entirely trustworthy. Inside the base, Rad and Alexis also admit to each other that they also get a bad vibe from Sideways. Fred, after riding around on Spiral for a while, inquires regarding the location of the bathroom.

"I've got a bad feeling about this."

—Alexis, regarding the boys tagging along as Hot Shot's cheer squad. You and me both, sister.

"Lucky for us Scavenger is here to do all the digging, don't you think, Starscream? Otherwise you would be in there getting your hands dirty."
"Right! There's no way you'd catch me playing in the dirt like that."
"If I had known I'd be the only one doing all the work down here, I would have never left Cybertron!"

—Mine boss Megatron with Starscream and Scavenger.

"Billy, Fred - sorry, but it looks like things might get a little dangerous out here. I think it's best if you stay put up here for awhile."
"Aww, gee-whiz! But I thought we were backup?"
"Yeah... well... you can back us up from here! Oh, and stay put!"

—Optimus Prime dumps Billy and Fred on the side of the road.

"Oh, this really bits big this."
"I told you we should have gone with Hot Shot, but no wouldn't listen, would you, doofus?
(a large purple motorcycle suddenly approaches)
"Huh?"
"Huh??"
"You lookin' to hitch a ride? I got room for one. That's it."
"Hey, B-Billy, that bike-"
"-talked to us!"
"Wait a sec: Autobot or Decepticon?"

—Fred and Billy lament being dumped, before the enigmatic Sideways approaches.

"Your battling days are over!"
"Hahaha! I like a bot with a sense of humour!"

"Hahahaha! Oh, joy! This is as easy as shooting bots in a barrel! Hahahahaha!"

—Fred's cry of loneliness, after Hot Shot, Scavenger and Sideways pass him without sparing a glance.

"You know, for a great warrior, you're not half as tough as you think you are. So just keep out of my way, or else."
"Hahahahaha!"
"What's so funny?"
"I was laughing at your incompetence. You may have won this little skirmish, but you're still a rank amateur. So don't let this victory swell up your power core because I'm not finished with you yet. Hide behind your little sword, but remember this: you don't have what it takes to use it to its full potential."
"Oh yeah?!?"
"You're just a waste of wires." *wanders off and laughs maniacally*

—Hot Shot gloating before Scavenger quickly brings him down to Earth.

"Back on Cybertron they used to call me Sideways. I guess I'm a bit of a drifter. Maybe that's why I'm here."

—Sideways's self-introduction to the Autobots.

"Oh, don't worry Hot Shot. You must remember they're only human, and in a couple of days or so, they'll be all over you again."

—Red Alert, on the fickle nature of children.

Little do they realize that the source of Sideways's power is funny-looking hats! 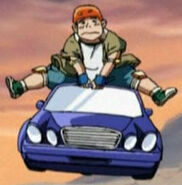 I'm sure this huge motorcycle doesn't attract any attention at all.

WTF?
Add a photo to this gallery

Retrieved from "https://transformers.fandom.com/wiki/Gale?oldid=459464"
Community content is available under CC-BY-SA unless otherwise noted.