Energon crystals are a powerful raw form of Energon with a drawback that they're also extremely unstable if one wasn't careful in handling it, because it is very explosive in this form. They are the unprocessed form of energon and are usually found in Energon mines ready for harvesting and refining.

When the Great War broke out, both Autobots and Decepticons seeded Energon crystals all across the galaxy for the sole reason of hiding them from the opposing forces. It is the reason why Energon deposits exist on alien planets such as Earth to be mined. They were highly combustible and when detonated in bulk, created a large enough explosion to destroy a mountain.

On occasion, Energon deposits would be buried due to environmental shifts of the world they were planted on and were unmineable by conventional means. The largest of these deposits became known as an N.D.7 class.

Dark Energon also naturally formed in crystals identical in appearance (save the colour) to regular Energon crystals. Like regular Energon, it had to be converted into cubes, or liquid form for consumption. Crystals were also the natural form of Red Energon, which likewise had to be refined into liquid form for a Cybertronian to access its speed enhancing powers for short period of time. 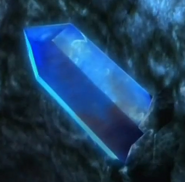 Add a photo to this gallery
Retrieved from "https://transformers.fandom.com/wiki/Energon_Crystal?oldid=461452"
Community content is available under CC-BY-SA unless otherwise noted.