Start a Wiki
Duststorm is a Decepticon who appears in Transformers: Universe.

"Ruthlessly efficient, Duststorm is a Decepticon warrior close to my dark spark."

The two words that stand out in descriptions of Duststorm are "tainted" and "corrupted" inside and out. She is a mechanoid after Megatron's own spark. Ruthless and efficient and geared towards doing maximum combat damage either up close or from a distance. Her weaponry keeps any "predators" at bay, and though her defensive armor and durability are low, she specializes in stunning opponents and making speedy getaways. Many victims never see more than the sickly glint of her distinctive augmented optic prosthesis before she pops their hoods from a distance.

Duststorm was part of the crew of the Leviathan when it shot down the Autobot ship Arclight over Central City. She and the other Decepticons on board went on to engage in a number of battles against the surviving Autobots in a number of places around the world. 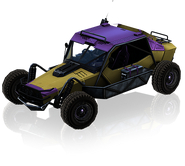 Duststorm's vehicle mode
Add a photo to this gallery
Retrieved from "https://transformers.fandom.com/wiki/Duststorm_(Prime)?oldid=455091"
Community content is available under CC-BY-SA unless otherwise noted.