Drillhorn is the veteran strategist amongst the Breastforce group. He very knowledgeable and very tough... and can be quite opinionated, to the point of being stupidly bull-headed. His adherence to past battle experiences can often leave him unprepared for unexpected changes in the battlefield. He's accompanied by his partner-mech Rhinobreast. 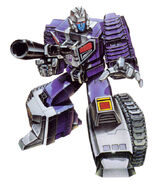 Drillhorn transforms into a four-treaded drill-tank (the drill doesn't spin, sorry). He also forms the right leg to the group's combined form Liokaiser. His packed-in partner Rhinobreast fits securely on Drillhorn's chest in either mode.

This mold was used to make the Rescue Force drill.

Drillhorn was also available in a complete six-piece box set of the entire Breastforce team. It's worth noting that this release does not have bio/tech cards for the individuals, only the combined form.

Retrieved from "https://transformers.fandom.com/wiki/Drillhorn?oldid=484367"
Community content is available under CC-BY-SA unless otherwise noted.