Start a Wiki
The name or term Drift refers to more than one character or idea. For a list of other meanings, see Drift (disambiguation).

Drift is the forty-sixth episode of Armada. It first aired in the United States on October 10, 2003 on Cartoon Network.

Everybody's hunt for Thrust leads to the revelation of the truth behind the Mini-Cons.

With Thrust gone, Galvatron orders Demolishor to find the traitorous Decepticon who stole both the Skyboom Shield and the Requiem Blaster. He disregards the Autobots' activities and commands all his resources to hunt Thrust down. Wheeljack and Hot Shot are already on Thrust's trail. Meanwhile, the Autobots are having difficulty getting the soldiers to withdraw from their fortifications. The soldiers are reluctant to let the threat of Unicron trivialize all the work they've done to try to take back the planet. Carlos walks in on Rad having a shower. Rad considers how much of a major difference in their lives it made to first meet the Mini-Cons, and speculates it might have been part of a larger design - based on a strange feeling he might have met High Wire in the past. Carlos dismisses the theory entirely. Hot Shot and Wheeljack radio the news about Thrust to Optimus, and High Wire sees on the video that the tunnels the two Autobots are venturing through are the tunnels where the Mini-Cons were created. After disconnecting, Hot Shot and Wheeljack also notice the suspicious organic nature of the caverns. Starscream also hounds Thrust on his own. The three kids, donning their color-coded space suits, also head to the same tunnels, guided by Rad's gut instinct. The first to locate Thrust is Starscream, so Thrust offers Starscream a job under Unicron. Starscream declines the offer, right before the kids arrive. Thrust fires a shot from the Requiem Blaster, blowing Starscream into the distance. In the blaze of light from the blast...

A younger Rad awakens on his mother's lap in the family car. Rad inquires about where the Transformers are, but the parents dismiss his ramblings. High Wire's voice calls Rad's consciousness to another point in time.
In mysteriously colorful caves, the three kids see Hot Shot's body strapped to the terrain. Hot Shot doesn't identify the kids, but just mentions that the Mini-Cons were created by Unicron's cells. He brings the kid's attention to other Transformers, lying dormant and embedded into the walls of the mysterious cavern, even the Decepticons. As Rad deduces that he and his friends have gone millions of years into the past, Alexis is creeped out. Hot Shot's body begins to be absorbed into the cavern, and there's another flash of time.
The three kids witness several Mini-Cons emerge from glowing eggs, knowing they're watching the Mini-Cons being created by Unicron. Rad sees High Wire, but when he tries to speak to his friend, all he receives is a mind's glimpse at Unicron. Rad, making a kind of grandfather paradox, instructs the Mini-Cons to find their way to Earth. Highwire reads a few images of Earth from Rad's mind.

Starscream's life is saved as time reverses just a bit as the kid's minds return to now. With a second chance, the Street Action Team combine and save Starscream's life, giving him a brief window to get close enough to be in no danger from the Requiem Blaster. An upwards shot alerts the two exploring Autobots to the location of the battle, and brings the cavern down, letting Thrust get away while Starscream protects the children. As Starscream runs off, continuing his hunt, High Wire speaks with Rad, validating Rad's theory that he had met the Mini-Cons before meeting on Earth. Hot Shot and Wheeljack arrive, and are astounded to hear what millions of years before, Hot Shot had told the kids.

Hoist: Sacrifices or not, an order is an order.
Generic Autobot: Oh, really? Tsk. Then what about all the commands we've had up until now? We've followed them to the letter. How many soldiers do you think we sacrificed to keep these positions from the Decepticons? And now you want us to pull out? You want us to hand this place over to the enemy? All the battles up 'til now were just a waste? Why don't you explain THAT to me, huh?
Scavenger: It's an order from Optimus, our commander himself.
Generic Autobot: Hn, stupid. Autobots, get your gear together, we've been ordered to retreat. Round up the equipment, we're clearing out.
Hoist: This is ridiculous.

—Dissension in the ranks.

Thrust: "It's not too late for you to join us, Starscream. If you work under us, who knows? You might even become the greatest Decepticon ever! Or would you rather fight and die in vain?"
Starscream: "Save your breath, you mindless machine! I'd rather fight and die than follow the likes of you and Unicron!"

—No, this episode isn't by Simon Furman. Why do you ask?

"Who would have thought the Mini-Cons were created by Unicron's cells?"

—Past Hot Shot spoils the show's big twist for anyone waiting to see it.

"So much for evolution, but one time we were told we could use them. But instead, we were the ones who were being used.

—Past Hot Shot savors the irony.

It's a very "Gundam" moment. 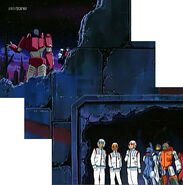 I too, hide from giant feminine people with man voices.

Bradley's mom has got it goin' on.
Add a photo to this gallery

Retrieved from "https://transformers.fandom.com/wiki/Drift_(episode)?oldid=459939"
Community content is available under CC-BY-SA unless otherwise noted.