Teletraan I: The Transformers Wiki
Register
Don't have an account?
Sign In
Advertisement
in: Decepticons, Characters, Transformers Robots in Disguise 2015 Character,
and 5 more

Divebomb is a Decepticon Mini-Con and partner to Fracture and Airazor.

In Hunting Season, Divebomb and Airazor had accompanied Fracture to Earth with the aim of collecting the bounty on Bumblebee, but immediately ran into Drift. The pair tangled with Drift's Mini-Cons, with Divebomb grappling with Slipstream. After Bumblebee's team joined in the fight, the three Decepticons retreated to their ship where they spied on the Autobots using micro-drones. They discussed about killing Drift and taking the bounty themselves, which made them all evilly laugh. After abducting several of the Autobots and a human, Fracture went to try and capture Bumblebee and the two Mini-Cons again tangled with Jetstorm and Slipstream. They managed to capture Fixit and Russell Clay, however Drift's Mini-Cons took control of Fracture's ship, and the three Decepticons were forced to retreat from the scrapyard.

In Sideways, after Fracture had joined up in Steeljaw's team, Divebomb and Airazor took part in a battle against the Autobots, attacking Strongarm until she managed to get cuffs on them both. Fortunately for them, Steeljaw later freed everyone and they all retreated to their hideout.

In Lockout, Divebomb and Airazor were deployed by Fracture to monitor the Autobot command systems after Steeljaw and his gang of Decepticons controlled the scrapyard. Unfortantely, they were attacked by Drift's Mini-Cons and fought them. After the Autobots took control again, Divebomb dived on Bumblebee and escaped with Steeljaw with Airazor. They rejoined with Fracture and the Decepticons escaped.

In Battlegrounds, Part 1, both Airazor and Divebomb placed a trap for Strongarm to fall in and carried her back to the Decepticon's hideout. When Fracture and his Mini-Cons managed to trick Russell into opening the scrapyard's gate, they used him as a way of getting in until Fixit managed to shoot near them, allowing Russell to escape them. Eventually the trio of Decepticons were taken out by an upgraded Optimus Prime, who came from the Realm of the Primes.

In Battlegrounds, Part 2, they were placed in stasis pods along with the rest of Steeljaw's pack, excluding Steeljaw himself. 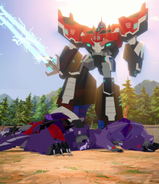