Depth Charge is a Maximal from the Beast Wars portion of the Generation One/Beast Era continuity family. He is sometimes known as Depthcharge.

Depth Charge was once an Imperial Peace Marshal, whose territory was completely destroyed, and every robot under his protection slaughtered, by the malicious entity known as Protoform X. Since that fateful day, Depth Charge has lived for no other purpose than to enact justice (or vengeance) on X. His single-mindedness makes him a relentless hunter, stopping at nothing to prevent X from taking any more lives. His quest has more than taken its toll on Depth Charge, though — whatever he was before, he is now a joyless, hollow shell of a being. While he sometimes expresses sympathy for other beings and lends aid to his fellow Maximals, Depth Charge has clearly been consumed by his mission, and the destruction of Protoform X is now more important to him than the original reasons behind his quest.

He is also one of the more SERIOUS characters.

"It's not revenge I'm looking for. It's justice."

―Depth Charge quoting somebody else in [["Deep Metal"| [src]]]

Depth Charge was a Peace Marshal stationed on Colony Omicron when Protoform X broke free and went on a rampage. As the colony's sole survivor, Depth Charge made hunting down "X" his only mission in life. Pursuing Protoform X to places throughout the Universe (including Starbase Rugby) Depth Charge successfully captured Protoform X, and turned him over to the Maximal Elders. The Elders decided that Protoform X should be placed in stasis aboard the Axalon and dumped on an uninhabited world.

Knowing that "Primal would screw it up", Depth Charge continued to monitor the Universe for any trace of Protoform X. The sensors on his Starhopper picked up traces of Protoform X just as he was pulled through a temporal anomaly; the strange radiation of the wormhole-like disturbance sucked in his ship and Transmetalized his superstructure. The resulting crash left him on prehistoric Earth with a Transmetal Manta Ray body, and put him right in the middle of the Beast Wars.

Depth Charge became a wild card for the Maximals. Although against the Predacons, and shocked by the presence of the Ark, Depth Charge initially refused to follow Primal's orders. They never knew if he could be counted on, as his pursuit of Protoform X, now known as Rampage always took precedent. His new body gave him the Cybershark (not the fellow Maximal) drone, which he used to track Rampage and later, inadvertently, Dinobot 2. His single-minded obsession usually ended up getting the Maximals in trouble. Once he outright refused to help the other Maximals in a mission to recover their Sentinel defense software, which resulted in its ultimate loss.

However, Depth Charge would comply with the Maximals from time to time. When Depth Charge was called forth to stop Megatron from launching the Nemesis he followed the order instantly, for even he knew how important it was to stop Megatron. Ironically it was Rampage who found Depth Charge on this mission and forced him into battle. They fought, their battle intensified by nearby Energon crystals throughout the terrain.

"Raw Energon! Right through your twisted spark! Take it! Take it straight to the Pit, you sickening piece of slag!"

―The ever friendly Depth Charge, to Rampage[[Nemesis Part 1| [src]]]

As Depth Charge attempted to shove an Energon spike into Rampage's spark, Rampage released Depth Charge's hands and laughed maniacally as he allowed his rival to destroy the both of them. His reasons for this are unknown. Some fans believe Rampage was using Depth Charge's own obsession with him to manipulate and corrupt him, with this scenario the ultimate test to see just how far the Maximal would go to claim "justice" over him. It may also be that Rampage simply decided he wished to be free of Megatron's control.

This incident was also the only time in the Beast Wars when a Maximal killed a Predacon (not for a lack of trying). And even though character deaths had occurred before in the show, this was also the first time when one Transformer slew another with his own hands.

Depth Charge was observed emerging from the water by Magmatron and Drill Bit. Due to their chronal displacement, they could see him, but he could not see them.

Apelinq mentioned a "lost Marshal who broke ranks to locate the ship Axalon on his own." in his journal. Undoubtedly, this may refer to Depth Charge.

When Optimus Primal was brought before Alpha Trion and Primus and told to select any Cybertronians past or present to form the foundations of a new army that would take the fight for the multiverse to Unicron himself, Depth Charge was chosen by Primal, along with Rhinox. Depth Charge was less than thrilled about being brought back to life, but that didn't stop him from saving Rattrap from a newly-corrupted Blackarachnia. Despite the sight of his old "friend", he still declined to participate, and left Rattrap unconscious only to run smack into the Piranacons. Homecoming

Note: Depth Charge's precise fate is unknown due to the cancellation of the series, which was due to 3H's bankruptcy. However, his toy bio indicates that he survived his encounter with the Piranacons and eventually changed his mind about participating in the war, eventually becoming part of an "underground railroad" inside Unicron that worked under King Atlas in transporting the Chaos Bringer's various captives to safety.

Depth Charge transforms into a robotic manta ray, plus has a third "air skimmer" mode. The very end of his tail detaches to form a sword/harpoon. In all modes, his robot chest/manta mouth is a spring-loaded, gravity-fed disc launcher, with 7 disks (Power pizzas as Cheetor calls them). He comes with a "cybershark" drone-unit that has two spring-loaded missile launchers in its mouth. This drone can attach to Depth Charge's manta/skimmer modes, or be used as a hand-held weapon in robot mode.

For the Takara Beast Wars Metals line, the "DEPTH CHARGE" tampograph changed to "CYBERTRON" and the faction sigil, as with all toys in the series. 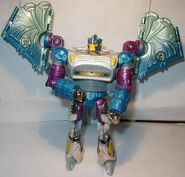 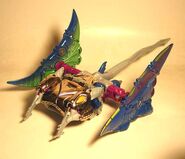 During Beast Wars Metals, Depth Charge was available both individually and in a double-pack with Metals Inferno. Both toys were identical to their individual releases.

Depthcharge was redecoed for the Universe line, into a series of dark drab greens, maroons, and black, with paint-wash effects on his wings. The end result is actually kinda Star Warsian. The toy had several small changes made for safety reasons. On the main toy, the front small... manta-ray-mouth thingies were cast in a much more pliable plastic. The tail of his cybershark drone was also changed to pop off as a separate piece; this also allows it to spin, plus makes it easier for Depthcharge to hold it in robot mode. The discs were given a much thicker, rounder border as well, and he only has 5 disks instead of 7.

Retrieved from "https://transformers.fandom.com/wiki/Depth_Charge_(BW)?oldid=350595"
Community content is available under CC-BY-SA unless otherwise noted.