The name or term Demolishor refers to more than one character or idea. For a list of other meanings, see Demolishor (disambiguation).

Demolishor is a military expert who serves Megatron through the Unicron Battles. He is a very trusted but sometimes very dim soldier who holds very true-to-spark values concerning loyalty and devotion to the Decepticon cause. These values sometimes collide with Megatron's ultimately selfish goals, and Demolishor finds himself struggling to reconcile the two.

Ultimately, though, Demolishor never abandons his devotion to the Decepticons as a whole, even if his faith in their leader is shattered.

His Mini-Con partner is Blackout. They are at odds with each other over their viewpoints, unquestioned loyalty versus independence from others.

Demolishor was ranked third in Megatron's forces and served as his right-hand military expert until the arrival of Thrust, although he often competed with Starscream for the title. He was often dense and simple-minded, but very devoted to his cause. Perhaps the most thoughtful action of Demolishor's during this time was to tear through a door Megatron had sealed in order to stop Megatron from destroying Starscream, whom Demolishor valued as a Decepticon ally. Demolishor was seriously damaged by Nemesis Prime, only to be reformatted into a red/white color scheme via Powerlinx energy. He would go on to serve in the United Armada against Unicron.

Following the end of the Unicron Battles, Megatron's death saw the alliance between the Decepticons and Autobots persist. With the establishment of Cybertron Cities to mine energon on Earth, Demolishor was assigned to Ocean City, where he guarded the city's main gate. Despite his frequent complaints and arguments with the humans and Autobots who lived in the city, Demolishor developed something of a friendship with his new allies and grew into his role. Of particular note was his bickering relationship with the inexperienced Ironhide, who didn't trust him for being a Decepticon, and whom he ridiculed in return for being a greenhorn.

In the year 2020, when the alien being Alpha Quintesson created the Terrorcons to steal energon for him, he armed their leader, Scorponok, with a sword forged from Megatron's spark. During a battle at Plains City, the sword was knocked aside and landed in the ground in front of Demolishor, but he could not bring himself to take hold of the weapon. The chance to return to his Decepticon nature versus his new role amongst the Autobots left him conflicted, unsure of what he truly wanted in life.

Demolishor's dilemma continued when Megatron returned to life and laid siege to Ocean City. When Megatron appeared before him, Demolishor trained his guns on him, struggling to make a decision as Megatron continually taunted him. Eventually, Demolishor caved in and rejoined the Decepticons, departing with Megatron for his headquarters within the inactive corpse of Unicron. Despite having made this decision, Demolishor's experiences had left him a changed 'bot, and he would be heard to caution Megatron on the frailties of humans.

Not longer thereafter, Demolishor participated in a Decepticon attack on the Autobot ship the Miranda II, which activated its personal energon grid defense system during the battle. Megatron was caught directly in the path of the grid, galvanizing Demolishor into making a final, fateful decision: He pushed his leader out of the way and took the force of the grid's blast himself. Oddly, Demolishor blamed Optimus for what happened to him and exploded. Nobody seemed to mourn the loss. (They do in the Japanese version, but this was altered in the English dub.)

Demolishor's body was destroyed, but his spark was salvaged by Megatron, who implanted it within a new body. Megatron used his Unicron-derived powers to wipe Demolishor's memory, removing any trace of his conflicted nature and degenerating him into a simple-minded, ape-like creature, easily excited and prone to grunting and jumping around. Demolishor retained his friendship with Cyclonus, now Snow Cat, to whose level of intelligence he was now much closer. There was occasional cuddling. In the end, Demolishor, along with Snow Cat, did not follow Megatron into the sun.

Somehow magically back in his original body (no word on whether his mentality recovered as well), Demolishor was left behind on Cybertron during the planetary evacuation, but has kept himself busy by fighting off the Scrapmetal Terrorcon horde. Demolishor has heard rumors that Megatron has once again returned from the dead, but hopes it is not true, as he enjoys not being pushed around by his commander for once.

Demolishor was part of Megatron's initial strike force on Cybertron, participating on the roundup of Mini-Cons and assault on and devastation of Cyber City. He kept the Mini-Con Crumplezone as his personal slave. Dreamwave Armada issue 2 Millions of years later, when a Mini-Con signal was broadcast from Earth, Demolishor followed Megatron to the planet and was reformatted into an Earth tank mode (well, not really). Dreamwave Armada issue 4 As he can't fly (or get any rocket thrusters), he couldn't follow Megatron's team to the Moon, but instead guarded Decepticon base on Earth. He was knocked unconscious by the Autobots. Dreamwave Armada issue 10 Later, in an assault on Autobase, Demolishor knocked Smokescreen off a mountain road, where he was seriously injured by Megatron. However, he was soon knocked out by Galvatron. Worlds Collide, Part 2 Megatron later made a truce with the Autobots to help fight Unicron, and Demolishor had to release Crumplezone so he could join with the other Mini-Cons.

Demolishor wasn't seen much after the battle with Unicron until he was attacked by the ghost-like Starscream. Multiplicity, Pt. 3

Following this, Demolisher was not seen again, if the company didn't go bankrupt, he'd return as Alpha Quintesson's slave, it was confirmed by the writer of the energon comic book series that he would return to earth and was sent by Alpha to recover Kicker, and would fight against the autobots and Rad's team.

Demolishor transforms into an anti-aircraft missile tank of made-up model. In vehicle mode, he has extra Mini-Con compatibility; there is a seat behind his turret so he can be piloted, plus the space between his treads features a clip/launcher mechanism for his partner Blackout in vehicle mode. Attaching a Mini-Con to his left shoulder's Powerlinx plug in either mode pushes his twin-missile launcher mechanism forward and allows his spring-loaded missiles to be fired.

The Japanese release of Demolishor uses a different shade of tan, plus paints his face brown rather than black, among other smaller paint application changes.

In Japan, Demolishor was available both separately and in a multi-pack with the Land Military Mini-Con Team. All toys in the set are identical to their individual releases.

An extremely simplified version of the original Demolishor toy, he features a "battle damage" pop-off arm. He can combine with the other Happy Meal Decepticons to form a super vehicle. Kinda.

One of the smaller Built to Rule sets, Demolishor's vehicle mode is still an anti-aircraft missile tank, but with only one firing rocket per side, activated by a pressure-launch mechanism using a rotating "drum". He also features working rubber treads. He comes with a building-block version of Blackout.

A late-series redeco of the original Demolishor in red and off-white. Part of the final wave of the Stateside Armada product, Demolishor's coloration was finalized after cardback photography was needed, so the card depicts a normal-colored Demolishor.

Part of the final wave of Armada Built to Rule, the first Demolishor set was redecoed into colors very close to those of the Night Attack Mini-Con Team. Again, he comes with a similarly colored version of Blackout.

Night Attack Demolishor did not ship very prominently, but eventually could be found at Toys "R" Us stores for the heavily discounted price of $2 or so.

Originally released as part of the regular Takara Super Link series, the original Demolishor toy was given a new color scheme of lime green and purple. This version was later released in the US late in the Energon line as a Kay-Bee stores exclusive alongside the Super Link redeco of Cyclonus.

Demolishor's new body transforms into a large "earth-mover" dump truck. His truck bed contains four spring-loaded missiles, plus four "false", non-firing missiles. His center torso block can rotate forward to bring his launcher over his body for "Hyper Mode"... which puts his head right in the middle of his sternum. His truck bed also feature two pairs of "dead" Powerlinx plugs to attach Mini-Cons to, one pair on each side of the "flap", allowing for Mini-Con Powerlinxing in bot truck and robot modes.

Available only in some Latin America markets, one of the two Energon McDonald's Happy Meal promos (neither of which were done in the US!) featured a heavily-simplified version of dump-truck Demolishor with a spring-loaded transformation to robot mode.

A late addition to the line, the original tank mold was redecoed in a more military camo scheme. He does not come with his Mini-Con partner Blackout in this release; instead, he has a new-mold Cybertron-style Cyber Planet Key, without a molded faction sigil, plus a Mini-Con-style Powerlinx socket on the back so it can be used to activate his missile launcher. The key has a painted Decepticon sigil, a purple border, and the Key Code "dt67" printed on the back. 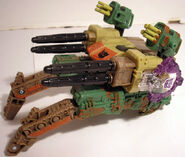 Shown at Toy Fair 2006, Attacktix Demolishor is based on his Energon dump-truck body, with a back-mounted missile launcher that shot a wide-headed missile. He was placed in an early mock-up of the starter set, but ultimately only the vehicle-mode Sky Blast piece would end up in the final product. The piece had no sticker on the front as well. And then... that was the last anyone saw of this piece. It was never shuffled into a later assortment or even mentioned anywhere. What the hell?

Retrieved from "https://transformers.fandom.com/wiki/Demolishor_(Unicron_Trilogy)?oldid=485778"
Community content is available under CC-BY-SA unless otherwise noted.