Darksteel was created, along with Skylynx, by Shockwave and Starscream, who were re-creating an old plan; Project Predacon. Darksteel revels in combat, particularly combat that ends with him standing victorious over a damaged Autobot. Darksteel appeared in Predacons Rising. Darksteel laughs a lot, is very easily amused, and often has a sick smile on his face. These traits make him a jovial Predacon.

When they were discovered by Ultra Magnus and Smokescreen, the Predacons engaged them, separating the two Autobots.

During the battle, Smokescreen was thrown by Darksteel and struck hard against a wall, while Ultra Magnus tried to intervene, but was attacked and was severely injured by Skylynx. Smokescreen escaped from Darksteel with the Phase Shifter to rescue Ultra Magnus and escaped through the Groundbridge.

After the battle Darksteel returned with Skylynx to one of the labs of Shockwave, only to be scolded by Starscream for being discovered by the Autobots. Sometime later Starscream located the remains of the Ancient Predacons so he and Skylynx were ordered to collect the Predacon bones. Darksteel bore witness as Unicron arrived and turned the Ancient Predacons into Terrorcons. Not long after he watched as Unicron's army of Terrorcons headed off for the Well of the Allspark, and met Predaking for the first time when he arrived on the scene.

Predaking demanded Darksteel to join him, but he and Skylynx initially refused and attacked Predaking instead. Although they had the upperhand against him for a short time, Predaking managed to pin them down and they surrendered. Shockwave, who was attacked by the Terrorcons, but survived, suggested that they use their strength against the Terrorcons.

Later on when Starscream planned to claim Darkmount as his own, Darksteel joined his fellow Predacons in settling some old scores.

In Mini-Con Madness, Starscream had explained to Bumblebee about how the latter survived from the Predacons at Darkmount. Starscream was chased by Skylynx and Darksteel deep within Darkmount, where Starscream accidentally turned on a stash of weapons that Megatron had stored against the Predacons. As a result, Darksteel and Skylynx were extinguished.

"And who made you boss?"

When Predaking first met up with Darksteel and Skylynx, they were not willing to take his command. Instead, they fought Predaking until they were defeated by him. Darksteel is now under Predaking's command and looks to him as a leader, a fellow Predacon brother and friend.

― Darksteel to Skylynx after being brained with the same Predacon bone that Darksteel accidentally hit Skylynx with.

Skylynx and Darksteel were both created by Shockwave. The pair are seen together throughout Predacons Rising. Skylynx is not fond of Darksteel's annoying habits, such as accidentally hitting Skylynx with a Predacon bone and laughing about it. Skylynx asked if it was amusing to him and hit Darksteel with the exact bone. When the pair fought Predaking, they were defeated and went under Predaking's command. Darksteel and Skylynx are good friends and Predacon brothers.

Shockwave is Darksteel's creator. While they have little interaction in Predacons Rising, Shockwave seems to treat Darksteel with respect. Shockwave even convinced Skylynx, Darksteel and Predaking to aid the Autobots in fighting against Unicron's army of undead Predacons.

Darksteel fought Unicron and was temporarily defeated by him in Predacons Rising. Darksteel, Skylynx, and Predaking fought alongside the Autobots in defeating Unicron's army.

Darksteel is one easily amused Predacon. Whether it's surprising Autobots, whacking Skylynx over the head with a bone, or thinking about the gutting of other Cybertronians, you can bet that Darksteel's going to laugh it up. At least he can stop joking long enough to scrap some Autobots. He appears to be very tough and skilled in battle, as he was able to take on Smokescreen in beast mode. Unlike Skylynx, Darksteel likes to goof around and not take things very seriously. He laughs quite a lot, even when it does not seem appropriate to do so. He displays a sick twisted sense of humor. However, Darksteel appears to respect his fellow brethren, Predaking and Skylynx. Darksteel took part in the alliance between Autobots, Knock Out and Predacons against Unicron. And like the other Predacons he has a ferocious predatory lust for destruction as shown when he and Skylynx attacked Ultra Magnus and Smokescreen, and Unicron. He lacks the arrogance of Predaking.

Darksteel is dark blue with some grey scattered here and there. His face is yellow as is the top of his head in beast mode. In beast mode he resembles a mechanical ursagryph.

Darksteel on the right 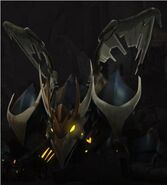 Add a photo to this gallery
Retrieved from "https://transformers.fandom.com/wiki/Darksteel_(Prime)?oldid=456369"
Community content is available under CC-BY-SA unless otherwise noted.