"No! No one can control Dark Energon! It dominates and destroys everything it touches!"

―Starscream in Transformers: War for Cybertron

Dark Energon, also known as Dark Magic (by Predaking), and also known as the Anti-Spark, (by Starscream), is a form Energon of which is notable for its spreading, corrupting and reanimating effects on most things such as Predacons and/or technology that it comes into contact with. It is also known as the Blood of Unicron due to its origin as Unicron's life blood. Dark Energon is considered extremely dangerous, being able to reanimate dead Cybertronians as mindless Terrorcons and bring inert and inanimate machines to life. Dark Energon also has the same harmful effect on humans like Leland Bishop than regular Energon has. According to Starscream, legend tells that it holds the power to revive the dead. However, for the living Cybertronians for place a piece of it in their Spark chamber, they can able to control the Terrorcons and they can survive from getting killed even from explosion and stabbed at the Spark. When a Cybertronian dies while still have Dark Energon, it prevent the deceased Cybertronian become one with the AllSpark and bind them to Unicron's Anti-Spark. However, mixing with Synthetic Energon would create energon sucking Terrorcons and they cannot be controlled by the Dark Energon users normally due to Synthetic Energon corrupting Dark Energon.

During the time Primus and Unicron battled, Unicron would spill Dark Energon if harmed since it flowed through his veins.

After Unicron's defeat, the remaining Dark Energon was stored abroad the Trypticon Research Station. Studies were conducted on it before it was deemed too dangerous for usage and locked away.

Eventually, Starscream became the overseer of the Station and the Dark Energon supply. He and his Seekers knew it couldn't be controlled, and remained untouched until Megatron's arrival during the War for Cybertron. Megatron had, for the first time known to Cybertronians, managed to control it. He agreed to teach it to Starscream as well.

When again encountering Omega Supreme who was on his way for repairs, Megatron managed to use it again on him, which Perceptor said was so bad Omega Supreme needed to be put in stasis.

While traveling in space searching for a new army, Megatron discovered a huge chunk of Dark Energon and planned to use it to resurrect the Cybertronian dead into his vast armies of destruction. He first tested it on Cliffjumper (who was killed by Starscream earlier) which turned the deceased Autobot into a mindless Terrorcon with no master to control. After the first test, Megatron fused Dark Energon into his body, making him more powerful than ever. One of Ratchet's tools that was broken by Bulkhead became infected with some of the Dark Energon sample that Ratchet took off from Arcee's hand, which it regained its own sentient life force. It destroyed one of Ratchet's tools and almost attacked Ratchet until Optimus Prime shot the sentient tool and stepped on it, thus killing it. It left Optimus and Ratchet to suspect that Dark Energon was involved in bringing Cliffjumper and Ratchet's tool back from the dead. Megatron had traveled to an ancient Cybertronian battleground where he used Dark Energon to raise and command large numbers of Terrorcons to deal with Optimus Prime and Ratchet, which they survived from the attacks with minor damage. Discovering the Decepticons had built a space bridge, they realized Megatron intended to reawaken Cybertron's fallen soldiers, and send them to destroy Earth. Megatron threw his store of Dark Energon crystals into the space bridge, but before the Terrorcons could cross the space bridge, the Autobots sabotaged it, causing it to collapse on itself, taking Megatron and the Terrorcons with it.

Luckily for Megatron, his Dark Energon infusion kept him alive until Starscream found him floating in space. Discovering the cause of his survival, Starscream ripped the Dark Energon crystal out and prepared to leave Megatron to die, only to have to take Megatron back to the ship when Laserbeak discovered them.

Megatron escaped from his own body into Bumblebee's, and made him recover the Dark Energon crystal he had used to create the Terrorcon army during the battle with Optimus and Ratchet, thereby facilitating his own body's revival.

Following this time, Megatron angrily commented that his vision for Dark Energon was to give him an unstoppable army of the undead to command and conquer the cosmos. However, he was relegated to only holding a small piece that now still animated his spark and thus became determined to locate more. As such, he ordered his Decepticons to gather components for a new Space Bridge so that he could use it to find more Dark Energon. He also attacked Bumblebee and wounded Raf Esquivel who became infected with Dark Energon which Ratchet was forced to expel by using normal Energon to counteract its effect. Megatron also became plagued by visions of a dark figure and a volcanic site.

Traveling alone to the site, he believed that the volcano on Earth was the location where his new Space Bridge would bring him a new source of Dark Energon from space. This led in a confrontation with Optimus Prime where Megatron eventually gained the upper hand. At the climax of the battle, a large deposit of Dark Energon erupted from the volcano to which a delighted Megatron learned that it was not to come from space from the planet Earth itself. This left a confused Optimus Prime to wonder about Dark Energon come from beneath the planet with the event coinciding with the tale told by the Ancients in the Covenant of Primus. The Dark Energon eruption was later determined to be pumped from Unicron himself, as he awakened in the Earth's core.

The Nemesis still had stocks of Dark Energon on board when it crashed. Megatron used some to reactivate the warship's power core, only to discover that as a side effect, it reawakened Trypticon's dormant mind. He only returned to dormancy when the Dark Energon was extracted from his power core.

Megatron used a chunk of Dark Energon to forge the Dark Star Saber.

During Knock Out's experiments with Synthetic Energon, Starscream had the idea of adding some Dark Energon into the mix, so that Megatron would be able to control the resulting troopers. Unfortunately the mix instead altered those it was infused into, causing them to burn through their energon reserves and turning them into energon-sucking Terrorcons.

When Megatron died the Dark Energon prevented him from joining the AllSpark as he was long since bound to the Anti-Spark. Unicron used the link to reanimate Megatron and take over his body. When in Megatron's body, Unicron displayed the ability to conjure weaponry from pure Dark Energon. When Unicron's anti-spark was being sucked from Megatron's body and into the AllSpark's container, the Dark Energon was drained from Megatron. Some of it coud still be inside Megatron.

While on Earth hunting prisoners, Bumblebee made reference to Dark Energon saying it was far more dangerous than any escapees.

In Darkness Rising, Part 2, Megatron and Starscream talk about Dark Energon as if they have never seen about it before, treating as something out of mythology. However, in the games and novels, the two are incredibly well informed on it with Starscream having studied it for many stellar cycles and Megatron being able to control it. All the Autobots have no idea what it is despite it causing the death of their planet. This was done to teach audiences that had not played the game or read the books about the substance. In One Shall Rise, Part 3, Ratchet tells the children that Cybertron's core was poisoned, while the flashback clearly shows Dark Energon. It was phrased like this to avoid highlighting the characters' lack of knowledge at the start of the series. 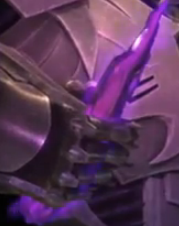 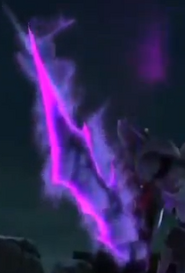 Add a photo to this gallery
Retrieved from "https://transformers.fandom.com/wiki/Dark_Energon?oldid=447466"
Community content is available under CC-BY-SA unless otherwise noted.