Start a Wiki
The name or term Cybertron refers to more than one character or idea. For a list of other meanings, see Cybertron (disambiguation).

The story centers on a giant black hole that threatens to devour Cybertron and other worlds. Only the power of the Omega Lock can stop it; Optimus Prime and a small team of Autobots travel to various worlds in search of the lock and the four Cyber Planet Keys needed to activate it. Megatron, even more obsessed with power and godhood, attempts to seize the lock and the keys to boost his own personal power.

The series' Japanese counterpart Galaxy Force was presented as a continuity reboot - but was then retconned into a continuation of Super Link by later materials.

"Cybertron opening credits"
―Our worlds are in danger!
To save them and the galaxy we must find the four Cyber Planet Keys before the Decepticons can use them for evil.
It is our mission.
Hot Shot, Jetfire, Vector Prime, Landmine, Scattorshot; Optimus Prime...
...Transform and roll out! [src]

Like Energon before it, Cybertron was animated using shaded CGI for the Transformers characters, and cel animation for most everything else. Though more advanced than that of Energon, the CGI still suffers from most of the problems of its predecessor: Few facial expressions beyond "mouth open" and "mouth closed"[1], restricted range of motion, a tendency for the Transformers to stand around like statues, et cetera. The shading techniques used on the Transformer characters also means they look very strange alongside their traditionally-animated human cohorts.

There is a sense that Cybertron actively attempts to avoid the main problem that plagued Energon—that is to say, running out of plot. Consequently, while the basic plot of Cybertron is far more focused and coherent than that of Energon, its first half is quite ponderous and drawn out, especially in the case of the Velocitron story arc, in which thirteen solid episodes are taken up by race after generic race, doing very little to advance the plot. Conversely, then, in the final quarter of the series, the stories of Gigantion and Planet X seem very truncated, as if the drawn-out first half left no room to see these plots through to their fullest extent.

In addition, Cybertron delights in the use of stock transformation sequences, using them to pad out episodes as if they were packing peanuts.

On the plus side, the three kids who serve as central human characters generally aren't considered quite as annoying as many of their predecessors. We're looking at you, Kicker.

The dub is much more polished than that of Energon or Armada, giving characters distinct voices and accents (which totally never happened before, really), and throwing a lot of pop-culture and Transformers references into the mix. It also makes the excessive stock footage — which seems to make up 50% of some episodes — mildly entertaining to listen to by having the characters talk during them. As time went on, the stock-footage banter got a little self-referential and fourth-wall-pokey, showing that the writers were well aware of what they were working with.

Since the scripts had comprehensible context and some actual work put into them, the voice actors were likewise able to turn in stronger performances.

As noted above, the Japanese version (Galaxy Force) originally treated the story as a stand-alone, unconnected to any previous story. The American version draws connections to the Armada and Energon cartoons, but various incongruities still exist:

Within the show, most of these problems were never directly addressed; the cartoon simply went about telling its story without much regard to previous events. (Indeed, vanishing characters and new bodies had previously occurred in the changeover between Armada and Energon with equally little attention, though the stated ten-year fictional gap between those shows makes it somewhat less intrusive.)

However, external material has addressed some of the problems. The Cybertron comic storyline Balancing Act, for example, Vector Prime claims that the Autobots are suffering memory problems, caused by temporal disturbances from the Unicron Singularity. This, however, does not explain why the people of Earth didn't remember the Autobots, or what had happened to the Technology that existed on the planet during Energon. However, it may be possible the human race severed all ties with the Cybertronians due to the destruction caused by their seemingly never-ending war and destroyed the mining cities, or the singularity could have made them forget everything as well. Jetfire's new accent was explained on the Hasbro web site as a result of time spent on the planet Nebulon.

It can also be speculated that Vector Prime's sudden appearance into the series caused a rift in time that completely changed the time line, causing such things as memory lapses, new bodies and a completely different Earth. It does seem towards the end of the show that certain characters do recognize the Transformers as Rad and others appear on-screen staring into the sky.

Some fans believe that the cartoon follows the unfinished Energon comic book series from Dreamwave. Unsubstantiated rumors to this effect have swirled since the cartoon's debut, though the only "evidence" comes from media outside the cartoon:

The entire notion of a network television cartoon following up on a comparatively obscure, unfinished comic book seems counter-intuitive; furthermore, Hasbro material has presented many explanations for contradictions between the two cartoons. Why bother explaining why Cybertron Jetfire sounds different if he's not the same guy seen in Energon? Why have Vector Prime explain the differences between the two cartoons if they're not in the same continuity? 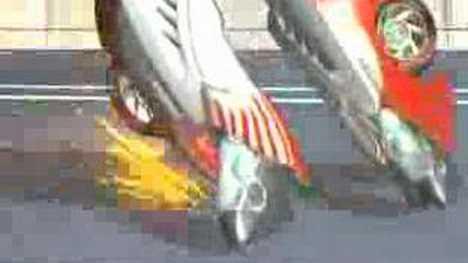 Retrieved from "https://transformers.fandom.com/wiki/Cybertron_(anime)?oldid=478413"
Community content is available under CC-BY-SA unless otherwise noted.