Teletraan I: The Transformers Wiki
Register
Don't have an account?
Sign In
Advertisement
in: Characters, Decepticons, Transformers Robots in Disguise 2015 Decepticon,
and 4 more

Clawtrap is a crab-like Decepticon and the leader of the Scavengers. He appears as a secondary antagonist with his scavengers in Transformers: Robots in Disguise.

In Strongarm's Big Score, Clawtrap was unhappy when Scatterspike returned empty-handed from a scavenging mission, but told her the planet still harbored great treasures.

In Pretzel Logic, he dispatched Thermidor and Tricerashot to find another relic, and had to put up with Thermidor's complaining over the comm. When the pair were defeated, Clawtrap forcibly hauled them back to their base through the GroundBridge.

In Mighty Big Trouble, Clawtrap and his crew followed a signal to an automated vessel, from which they were able to retrieve the Dark Star Saber from the sea floor. Clawtrap's joy was short-lived, as the Mini-Cons abruptly stole their sub-orbital craft, and Starscream arrived through a GroundBridge to claim the sword. Starscream demanded the location of the Mini-Cons, and when Clawtrap revealed they'd already fled, Starscream sent him flying into the ocean with a swipe of the sword.

In Mini-Con Madness vengeance on Starscream, Clawtrap and his crew attempted to hunt down the Mini-Cons, and indeed found them, however the Mini-Cons had teamed up with Optimus Prime and Team Bee. With the use of the relics they'd recovered, the scavengers put up a decent fight against the Autobots and trapped them in an energy net, only for Starscream to swoop in and snatch up the Mini-Cons.

In Worthy, thanks to Thermidor, the Autobots escaped their net and, with some help from Tricerashot, defeated the scavengers and they were placed in restraints by Strongarm. 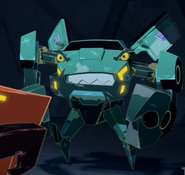 Clawtrap from the back
Community content is available under CC-BY-SA unless otherwise noted.
Advertisement